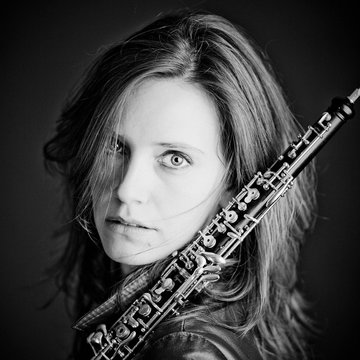 Liesbeth Allart is a freelance oboist enjoying a varied career. Based in the UK, and with family ties in the Netherlands and Ireland, she has played with orchestras and ensembles throughout Europe, including the BBC Concert Orchestra, RTÉ Concert Orchestra, and the Netherlands Symphony Orchestra. As a keen interpreter of contemporary music, Liesbeth has taken part in the Huddersfield Contemporary Music Festival and is a regular guest with the Insomnio Ensemble in the Netherlands. For ten years she was the oboist and Artistic Director of De Bezetting Speelt, a chamber group in the Netherlands, which she recently said farewell to in order to focus on devising a couple of exciting future projects in the UK. Liesbeth has a great interest in theatre, and was involved in performing the music in a number of productions at the National Theatre and in the West End. Teaching music to young people is a big part of Liesbeth’s career. Alongside a private teaching practice, she teaches in a number of schools and is a regular deputy teacher at Trinity Laban Conservatoire of Music and Dance’s Junior Department.

Liesbeth Allart was an ideal advocate for the Oboe Concerto, so accomplished in interpretation that one was hardly aware of the rock-solid technique. Lynne Walker - The Independent