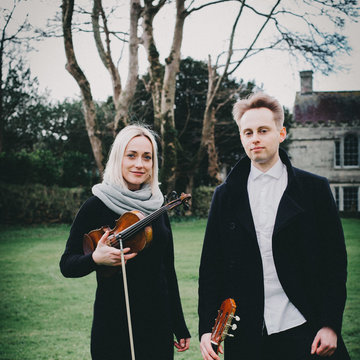 We are a violin and guitar duo based in Cornwall, available for weddings, functions and events.
3 of 4 photos
Classical duo
Redruth
Public liability insurance of £10 million
Verified profile

Veronika studied the violin at the Kromeriz and Ostrava Conservatoires. After 6 years of study she graduated as a performer and violin teacher in 2007. During that time, Veronika performed in several orchestras in the Czech Republic and was also a part of the Baroque Ensemble of Olomouc. Before leaving the Czech Republic, Veronika successfully auditioned for the Carlsbad Symphony Orchestra. Although originally a native of Somerset, Daniel spent the majority of his formative years growing up in West Cornwall. Daniel first picked up the electric guitar at an early age but soon became enamoured with the music of Francisco Tárrega, Isaac Albeniz & Heitor Villa Lobos and consequently started studying the classical guitar thereafter. When studying at the University of St. Andrews, Daniel studied with Matthew McAllister from the Royal Conservatoire, Glasgow and his since attended several master classes with world-class performers. Daniel also played in the guitar quartet at the university. Daniel and Veronika started rehearsing and arranging together during the Spring of 2017. Given the seeming lack of suitable arrangements for the violin and guitar they decided to produce their own arrangements of classical pieces for public performance. They both currently live in West Cornwall where they teach music, rehearse and perform together.

We chose our song and it was played so nicely. Leto Duets suited the wedding venue perfectly!

Everyone really enjoyed Leto Duets playing their Argentinian tunes at Falmouth Food Festival. We will definitely have them here next year!