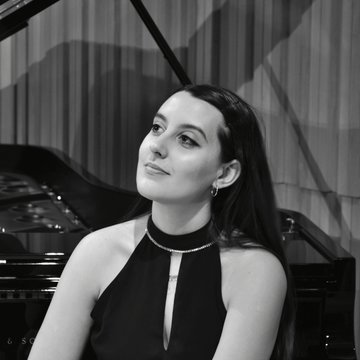 Pianist based in London currently studying at Royal Academy of Music

Born in a Hungarian-Romanian family and raised in the region of Transylvania, Leona fell in love with the traditional folk music of the region at a very young age. This influenced her to enrol at the ‘Sigismund Toduta’ Music School in Cluj, Romania to pursue piano, studying with Rodica Tarta. Later she moved to the United States to continue her music studies at the Alabama School of Fine Arts with Dr.Ronald Shinn, and is currently a student of Colin Stone at the Royal Academy of Music. Her passion for Transylvanian folk music has stayed with her, and always includes works in her repertoire influenced from this region, especially those of B. Bartók, G. Ligeti and F. Liszt, which she feels mostly connected to. In 2017 she won the 13th Hungarian Music Competition in Bucharest, performing works for voice and piano duo by B. Bartok and Z. Kodaly with soprano Waimay Yau. This lead to concerts at the George Enescu Hall in Bucharest and the Balassi Institute in Vienna. Leona is an active performer and participant in international piano competitions and festivals. Amongst others, she was a finalist in the International Institute of Young Musicians Competition in Kansas, first prize winner in the Boykin Piano Competition in Alabama, and third prize winner in the HRH Lalla Meryem International Competition in Morocco. She has performed in music festivals such as the Bozsok Music Festival in Hungary, Aurora Music Festival in Sweden, Aegean Arts Festival in Greece and Lucerne Piano Festival in Switzerland, and venues such as St Martin in the Fields, St James' Church Piccadilly, Goldsmith Hall, Alys Stephens Centre and Klaipeda Academy of Arts. As an avid performer of 20th and 21st century music, Leona explores repertoire that is less often performed. For the past few years she has been collaborating with various living composers from different countries. In 2017 and 2018 she recorded several pieces by composer Sophya Polevaya for Naxos. She has been invited to premiere works at the Royal Academy of Music, the Balassi Institute Vienna, the Leeds Lieder Festival and Tete a Tete: The Opera Festival. She also actively works with artists to find ways of reinterpreting the 'classical performance' and 'classical repertoire' through performances and istallations, by pushing the boundaries of what is considered conventional in classical music performance for a deeper connection with music and the audience. Her projects have come alive in venues and festivals across London, including the Royal Academy of Music Piano Festival, the Bloomsbury Music Festival, New River Studios and the Angela Burgess Recital Hall. In 2019 she collaborated with Belle Chen and students from the Royal College of Art, Andrea Christoudulides and Simone Schiefer, on a multimedia project reimagining the concept of 'playing' as children and adults through a selection of pieces from 'Games' written by G. Kurtag. The idea of being able to set free and express our inner characters and imagination without the limitations of adulthood and our society. Their work was presented in an installation at the Casa Menotti Festival in Italy. Leona is currently a fourth year student at the Royal Academy of Music in London, studying with Colin Stone and Michael Dussek. She has participated in masterclasses with teachers such as Peter Nagy, Christopher Elton, Julian Martin and Nicolas Hodges. Her studies are generously supported by the International Scholarship and Tuition Services and the Halliburton Company, and is a member of Talent Unlimited Music Charity.

Lovely to work with. Very trustworthy.

AN
Alabama N
8 years ago