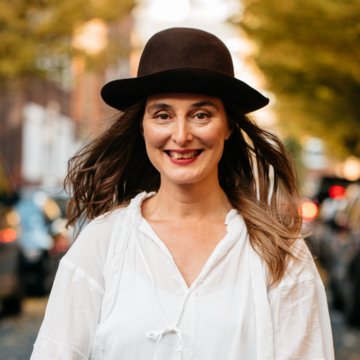 Lena Margareta grew up outside of Stockholm. She discovered Louis Armstrong and started playing the trumpet at the age of nine, but soon her love of singing took over. In her mid teens she received a scholarship to study jazz vocals privately for Margareta Thalén Ekstam, head of the vocal education at SMI, University College of Music Education in Stockholm. While developing as a professional jazz singer, Lena kept playing the trumpet as a second instrument. She entered the Stockholm independent ska scene and played, sang and wrote songs for numerous ska bands, touring Sweden and Poland with Krabb, and gigging in Germany with Lügchen, before starting her own ska/jazz band Bakelit. After re-locating to London in 2013 she took up the autoharp, and has since then played solo gigs with her own brand of jazz/ska/country, whilst also working with various constellations of London musicians. She has run a regular ska jam and her two own comedy nights, is frequently in demand as a quiz master and has recently developed her popular live music quiz. She is also regularly hired as a bugle player to play at funerals and military memorial services. Lena Margareta is a full time freelance musician, with a voice that has been compared to chocolate and Erykah Badu, a kind and friendly stage personality and a sunny disposition.

SOLO, with autoharp:
Ave Maria
Bad moon rising
Both sides now
Daddy, you've been on my mind
Don't think twice, it's alright
Fairy tale of New York
Have yourself a merry little Christmas
Hound dog
I will always love you
Let it be
Mack the Knife
Making Whoopee
Mister Big Stuff
Moon river
One after 909
Ring of fire
Rollerskates
Silent night
Somebody
Summertime
Stormy weather
The final countdown
They're calling me Miss Pitiful
When they lay me down
ACOUSTIC DUO, with guitar and trumpet:
Aint no sunshine
All of me
As time goes by
Cherry
Come together
Fever
Fly me to the moon
Gee baby, aint I good to you
Georgia on my mind
Girl from Ipanema
Have you met miss Jones
Heard it through the grapevine
Hello Dolly
I'm in the mood for love
I want you back
I will survive
Kiss
Love for sale
Lover man
Misty
My baby
Night in Tunisia
Rehab
Signed sealed delivered
Son of a preacher man
There will never be another you
Valerie
What a wonderful world
Customer questions

I always strive to make room for some flexibility in my schedule, so if your timings change slightly in the run up to the event just let me know as soon as possible and I'll do my best to adapt.

I'm happy to help you plug your iPod through my PA before and between my sets. If you want to keep using the PA after the final set, let me know and I can stay until the venue closes for an extra fee.

I like to arrive an hour before the performance time to set up.

Absolutely, you can pick and choose any songs you like from the list, and I'm also happy to discuss adding your favourite songs for an extra fee.

Yes, I can provide my own PA.

Do feel free to ask me, chances are I know the song even if it's not on my set list. And if it isn't I often learn new songs for a specific gig. Just let me know what song you would like, and I will make sure I can perform it to the utmost standard. I charge a fee of 30 pounds for rehearsal time when providing this service.

Lena is a very talented musician with a wide repertoire. I have worked with her in various events I have curated. Her rendition of "Santa Lucia" is divine. Sarah Michel, the Phoenix Sessions

Lena Margareta has performed for me on many occasions. Not only is Lena a brilliant entertainer, a versatile musician and a jazzy, bluesy singer, she is both professional and personal. I have recommended Lena to others and have always had follow up reports of how well she has done and that others have been pleased with the performances. Rob Richier, owner of Fratelli restaurant and The Warrant Officer pub

Lena is a professional performer with a fantastic voice and great energy on stage. She can sing basically any genre and always gives a 100% on stage.  She is very punctual and always well prepared. I definitely recommend anyone to book Lena for a gig, simply because they will have a great time! Ellinor Sjöberg, Svenska Kyrkan

Lena is an exceptional performer, truly gifted, highly professional, multifaceted, with a depth of knowledge of her art and craft that is then easily translatable to any occasion. She is also very witty and observant of the mood of the crowd, feels the room well, with a sharp sense of timing and a gentle rapport with the audience. Lena and myself organised three different types of events. She is generous, open, focused, approachable and flexible at all times. Lena was also always punctual, diligent, and courteous, a true pleasure to work with. Milana Vujkov, Picturehouse Central

Lena is a trained professional musician, and very customer focussed, reliable and punctual. She is accommodating to fit with the tone of Royal British Legion ceremonies. I’d recommend Lena for her proactive communication, aims to please and her reliability. Sarah Stephenson, The Royal British Legion

Lena engaged fantastically with the audience and the singing and music playing was exceptional.

What an amazing performance.