Lauren Dalrymple and Her Musos 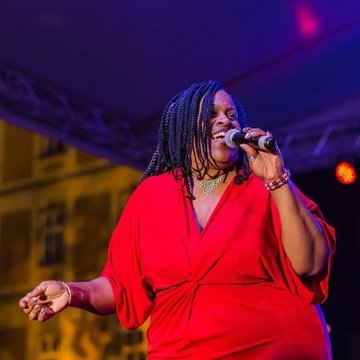 About Lauren Dalrymple and Her Musos

A VOICE TO BOTH FILL A ROOM AND YOUR HEART!!

British born of guyanese parents, vocalist Lauren Dalrymple has been singing since the age of 8. Initially singing in choirs in venues such as The Royal Festival and Albert Halls. She received intense vocal training, later going on to indulge in BV session work at the age of 18 before striking up the decision to go solo at the age of 19. A chance meeting with Alex Wilson, back in 1993 ( BBC rising star winner 2001) was to be the start of a great partnership both writing and performing. Lauren features on Wilson's Afro-Saxon '98, Anglo-Cubano '00 and R&B Latino in '02, all of which she has written for. Known as "The SoFF" Sistah of the Fuller Figure, Lauren has The SoFF Music brand making much joyous noise starting with The SoFF Music Jazz Jam for over 20 years, in our nation's capital with great success. The SoFF Music Vox Box, coaching vocals to professionals and amateurs alike and The SoFF Music Voice Community Projects & Workshops.

Agua de Beber
All of Me
All the things You Are
Autumn Leaves
Black Coffee
Black Nile
Blue Bossa
But Not for Me
Chega de Saudade/ No More Blues
Cold Duck
Comes Love
Down and Out
Everybody wants to Cat (Aristocats)
God Bless the Child
Guyanses folk songs
Here's to Life
Honey Suckle Rose
How High the Moon
I'm in the Mood For Love
Love 4 $ale
Mercy Mercy Mercy
Misty
More I See You (The)
On the Syreet Where you Live ( My Fair Lady)
Overjoyed
Pennies From Heaven
Prelude to a Kiss
Secret Love ( Calamity Jane)
Softly as in thr Morning Sunrise
Stompin at the Savoy
Stormy Weather
Sunny
Taking a chance on Love
Teach Me Tonight
That's All
This Masquerade
What a Difference a Day Made
When I fall in love
When you're Smiling
You Stepped Out of a Dream
-----------------------------
Bye Bye Blackbird
Blue Skies
Green Dolphin Street
It's Alright With Me
In Mellow Tone
Cherokee
The Masquerade is Over
Here's to Love
Blue Bossa
Nearness of You (The)
You Dont Know What Live Is
Lover Come Back To Me
Take Five
Perdido
What is This Thing called Love?
It Had to Be You
My Funny Valentine
Nature Boy
The Days of Wine and Roses
You'd Be So Nice to Come Hone To
One Note Samba
Lullaby of Birdland
Everybody Loves My Baby
Customer questions

Our line-up is as follows: Vocals, Keys, Drums. Bass. We also have the option to include Horns

We always try our best to be flexible to help ensure your event runs as smoothly as possible. If timings change slightly in the run up to the event just let us know the new timings. Timings over an gours differnce may need negotiating.

We can discuss ipod service. Unfortunately we do not provide Dj service.

We usually set up about 1 to 1.5 hours before the performance time. This is what we refer to as our "get in" time on our contracts and itinerary.

We're definitely happy to chat through and make sure we find what works for your event. ”

Our sets have familiarity and we have a unique way of "switching up" standards to give a fresh listening/dancing/enjoyment experience. The odd sing-a-long never hurt either.

Our musical tastes are varied and eclectic. This allows a wide and diverse way of aporicaching the music we perform.