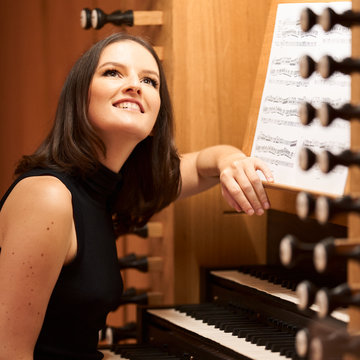 I am a Portuguese pianist/ organist currently studying at Royal College of Music!
Pianist
London

Born in Porto da Cruz, Madeira Island, Laura Silva Mendes started her musical studies at Associação Grupo Cultural Flores de Maio with the age of 6. Two years later, she began studying piano at the Conservatório – Escola das Artes Eng° Luiz Peter Clode, in Machico, Madeira, with Emesse Szepesi and later on with Iryna Kózina and organ with Galina Stetsenko at the Professional Music Instrumentalist Course in Funchal. In 2013, started her undergraduate in Piano at the Royal Conservatory of Antwerp, Belgium, with Polina Leschenko. She has performed often as a soloist and in chamber music formations in Main Hall of the Conservatory of Madeira, Municipal Theater Baltazar Dias – Funchal, at "Witte Zaal”, and "Blauwe zaal” – deSingel Antwerpen. In 2015, started her Master’s degree in Piano with Polina Leschenko and Eliane Rodrigues and started her undergraduate in Organ with Joris Verdin at the Royal Conservatory of Antwerpen. During these years, she had Organ masterclasses with João Vaz, Benjamin Righetti, Maurizio Crossi, Ludger Lohmann, Esteban Landart and others. She played as an organist in Portugal, France, Germany, Belgium, Holland and England. In February, 2019 she was selected to participate in the ECHO Academy in Brussels. In Jully, she attended the 55th International Estoril Music Course in Lisbon Cathedral with Michel Bouvard. Laura succefully applied to the Royal College of Music – London where she will continue her organ studies.

Her results are far above average and promise a most brilliant future. Laura is an exceptional motivated student, or should I rather write musician, gifted with natural talents and a steady will to proceed every day. In this context, her piano education shows to be an excellent tool for an intensive and comprehensive approach.

She is a hard-working student and always obtained excellent results. Organ playing is more than mere virtuosity and Laura’s willingness and ability to investigate the musical, historical and intellectual perspectives of the instrument(s) and its composers is the main reason why I don’t hesitate to recommend her.