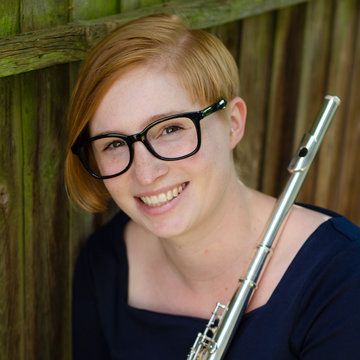 Laura completed her Undergraduate and Masters degrees at Royal Holloway, University of London. She has studied with Carla Rees, Simon Channing and most recently with renowned contemporary flautist Robert Dick at his residential studio in New York City. Laura was selected to take part in the inaugural Soundings Academy, a contemporary music festival run through the Austrian Cultural Forum in Knightsbridge, London. She was the co-founder of cross-genre ensemble WOLF PACK, with whom she held a five day residency at Vault Festival. She gave her concerto debut in March 2014, performing Lennox Berkeley’s orchestration of Poulenc’s Flute Sonata. A member of alto and bass flute ensemble rarescale Flute Academy since 2007, Laura has given numerous performances with the group, including performing as a soloist at the British Flute Society’s 9th International Convention. Laura has recently performed at the International Prokofiev Festival, Kensington, with rarescale at The Forge in Camden, and at Spectrum in New York City, as well as giving regular solo and chamber performances at venues in London and the South East. She plays a Sankyo-Kingma flute, with a key system developed by Dutch flute maker Eva Kingma that enables the instrument to play a full quarter tone scale, and works with composers to develop new repertoire for this instrument, as well as for alto and bass flute.

I always try to be flexible and accommodating where possible so that your event runs as smoothly as possible. If timings shift slightly in the run up to the event, then just let me know.

As I perform acoustically, I don't have the equipment needed for a DJ/ipod service- sorry!

Once I know where I need to be I can set up and be performing in 10-15 minutes.

My repertoire is wide ranging and I'm always happy to work with you to find the best music with your event.

Yes! I perform acoustically so require minimal equipment, but I bring all the things I need with me.

I have a wide variety of repertoire and am happy to work with you to make sure your chosen pieces are included in my performance.

I performed Debussy's Syrinx live on BBC Radio 4's Today programme in 2018 to commemorate the centenary of the composer's death.

CO
Catherine O
3 years ago, for a Concert in High St

Thank you so much for your wonderful recital on Saturday. It was very well received. And a special thank you for bringing all your flutes. It was great to hear the variety of sounds and repertoire for the different instruments. I do hope you will come and play for us again.

LW
Lucy W
4 years ago, for a Wedding in Riverground Stables

It was such a pleasure to have Laura play at our wedding. Not only does she play beautifully but she also helped to make the day go smoothly as she was so prepared and has such a wealth of experience that I was able to trust her recommendations for suitable music to play during different parts of the wedding day. This was particularly helpful as I have very little musical knowledge!