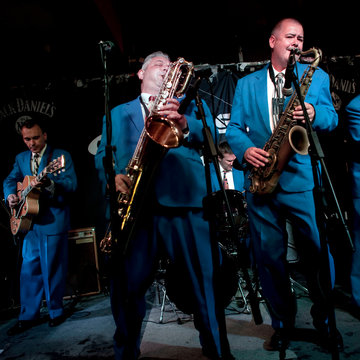 About King Pleasure & The Biscuit Boys

Paul Jones on BBC Radio 2 called them “the hardest act to follow since the parting of The Red Sea”, Atomic Magazine from New York wrote “To those who say that swing is a musical form best left to Americans, prepare to be proven wrong. This British combo is bullet-proof!” The Guardian said “Behind the fun and rollicking good times lies an outfit skilled enough for the horns to come on with the bite and precision of the Basie Band” With more than 6500 performances in 21 countries under their belt in their 30 years on the road, King Pleasure & The Biscuit Boys are more than just the world’s greatest jump, jive and swing band – they’re an institution! In that time they have opened shows for B.B. King, Cab Calloway and His Orchestra, Ray Charles, and toured with the real Blues Brothers Band - the one from the movie. They’ve played on 36 radio shows and made 73 television appearances, including several on Blue Peter, The Teletubbies, as well as the Paradise Club series where they were the house band. They also featured on Challenge Anneka, The Gadget Show and on a prime time National Lottery advertisement – not to mention accompanying John Barrowman in a rendition of I Get A Kick Out Of You on Live And Kicking. Rough, tough and always rocking, King Pleasure & The Biscuit Boys have appeared at festivals, in concert and at clubs throughout the UK and Europe – and they still play the Birmingham Jazz & Blues Festival, where they have headlined for an unprecedented 14 years. Along the way, the band have recorded 11 albums for Big Bear Records, all distributed worldwide. The band line up as King Pleasure [vocals and baritone saxophone], Boysey Battrum [alto and tenor saxophones], Bullmoose K Shirley [guitars], Mighty Matt Foundling [piano], Shark Van Schtoop [bass], and Gary ‘The Enforcer’ Barber [percussion].

CL
Chris L
2 years ago, for a Wedding in Eckington

Just wanted to say a massive thank you to King Pleasure & the Biscuit Boys for being so fantastic! The music went down an absolute storm, and there was definitely some questionable dancing from our family and friends (but mainly from myself) We really enjoyed ourselves :)

DC
David C
3 years ago, for a Birthday party in Colwall

Party went very well, everybody enjoyed themselves and had a great time - it's the talk of the village.