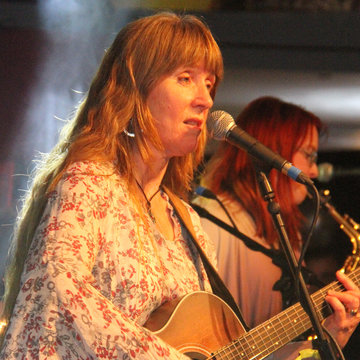 Elaine Samuels began her singing / song writing and performing career as a solo artist back in the early '90s and still enjoys performing solo. As a solo act, Elaine has supported Dave Cousins & Brian Willoughby, Roy Bailey, the Albion Band, Isaac Guillory, and many more. She has performed at folk clubs and festivals throughout the UK too including Middlewich Folk and Boat Festival, Cleckheaton Festival, Faversham Folk Club and Orpington Folk Club, to name a small few. As well as having given plenty of interviews on the radio, Elaine has also performed on television a number of times. She performed live on Wire TV at the Bentalls Centre in Kingston, came second on a televised talent contest called "Live at The Y" at Leicester's Y Theatre (she was the only solo act out of a show where the other performers were all rock bands). She was also filmed for HTV, as part of an environmental series, on top of Glastonbury Tor, where she sang one of her own songs, "Blue Skies". Elaine formed the first incarnation of the "Kindred Spirit Band" back in the '90s and, like "Fairport Convention", there have been many incarnations since! The current band members comprise of brilliant electric guitar player Piers Hogg, excellent wind player Stevie Mitchell, Keith Buckman on bass and Aleem Saleh on drums and percussion. The band have played, to the delight of audiences (see our "Gig Reviews"), at Art Centres (for example Windsor, Farnham Maltings, Cranleigh), theatres (for example Leatherhead and The Kenton), festivals (for example Weyfest) and clubs (for example the Cavern Club in Liverpool, where they impressed Julia Lennon, who came back stage to compliment them on their performance).

You certainly caused a storm here at Brooklands, I have had tons and tons of excellent feedback from colleagues, listeners, and friends, and I feel grateful and blessed to have met you and to have shared two very entertaining and unforgettable hours.

This was a set of perceptive and intriguing originals including thrilling rock moments, subtle and haunting moments plus folky jigs and reels. For me the highlight was the scorching electric violin and the amazing flute solos, together with the voice of Elaine Samuels.