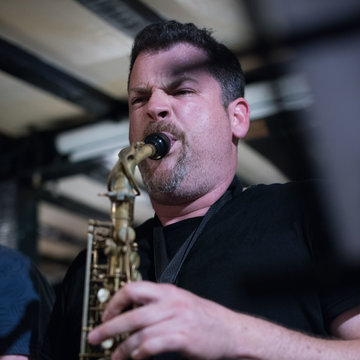 Kerry is an accomplished saxophonist and doubler. He is proficient in all styles from pit orchestra work and cabaret to jazz, rock, and pop
3 of 5 photos
Alto Saxophonist
London
Public liability insurance of £10 million

Kerry Williams is a professional Saxophone, Clarinet and Flute player originally from Baker City Oregon, USA. Now based in London, Kerry’s versatile career has seen him cover many different styles and genres. Recent credits include, The Glenn Miller Story at The London Coliseum (2018), Touring major U.K theatres with shows such as Our House, The Musical (2017) and The Glenn Miller Story (2016), starring Tommy Steele. Kerry also plays in and manages Jazz group, Starlight Jazz and Vintage band Mandy and the Mood Swings. Kerry’s career has taken him all over the world, performing on various luxury cruise lines including Cunard Line’s Queen Mary II, alongside high profile guest artists, including alumni from the Julliard Jazz program. Kerry has most recently performed in venues such as The Crazy Coqs - Live at Zedel, The Savoy, The Banking Hall, The Green Note. Kerry is also an experienced session musician, working with L.A based company Moment Music on tracks. Most recently Kerry has been working with North Wales/Chester based band Denuo on new material.

Sunny side of the street
Someday my prince will come
L.O.V.E
Lady is a Tramp
Autumn in New York
At Last
Take five
Mack the knife
Crazy
Halo
Creep
Hotline bling
Shape of you
Empire State of mind
Isn’t she lovely

Verified
Sabrina B, 1 year ago

Highly recommend Starlight for award ceremonies. The band was professional and the song choices were much appreciated by all guests. Would definitely book them again for future events

Great band! We booked Starlight as a trio to play music for our wedding ceremony and reception. The communication was really good and reassuring before our wedding and they really made sure everything was perfect for our day. Our guests loved them.

Speaking to Kerry before we booked him on our big day, we were really specific…. Probably the most specific with any supplier as we wanted to have a certain sound and feel for our Wedding. Not only was Kerry more than happy to accommodate our stylistic preferences, he was even able to give some brilliant suggestions, and at short notice, when we compiled a small playlist of the songs to be played during the guests arrival, during the Wedding reception ceremony and post ceremony celebrations; Kerry and the team were able to take upon these song requests, learn these, actually take on board the tempo and the tune, the acoustics, and to play from different youtube videos and make it into their own Guests were really able to take some fantastic pictures and stories on their Instagram, things they really wanted to share and impress upon their friends and online followers shows how much how much of a great day and experience they had and Kerry Williams and the Starlight team were really able to set the scene. Starlight Jazz were the first ones there to take the guests through the journey before we got married and also keep them entertained straight after we got married whilst we were taking our photos as people were catching up, and keeping them entertained up until the moment they entered for the Wedding reception breakfast.. So big round of applause from us, congratulations once again and thank you so much and we would be able to recommend you to anyone for those that want a Saxophonist or a band to play at a Wedding or any other function so Kerry and the Starlight team thank you! Best Wishes San & Maria Sofitel St. James