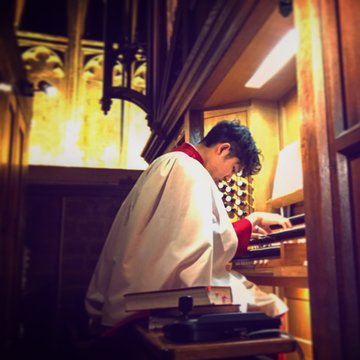 Kentaro Machida is currently the organ scholar at Merton College, Oxford, where he is also in his first year studying music. He is also the current conductor of Oxford University Sinfonietta, the university's premier chamber orchestra. His musical career started at the age of 4, when he started learning the piano, quickly developing his keyboard skills; he soon progressed onto playing the French horn, and has since achieved Grade 8 distinction on the horn and an LTCL diploma on the piano. At Magdalen College School, Oxford, where he was both a music scholar and an all-round scholar, he took up the organ at the age of 14, and took up the post of principal school organist in 2015, which allowed him to develop his musical appreciation and technical skills to a further level during his school years. During his gap year, he served as organ scholar of Sherborne Abbey/School, and his scholarship at Sherborne allowed him to play regularly for the boys’ choir of the school and the regular abbey services, as well as teaching piano and assisting in the running of the school’s renowned music department. He has previously studied with Malcolm Pearce and Margaret Phillips. He currently studies organ with Christian Wilson, and conducting with Roland Melia.