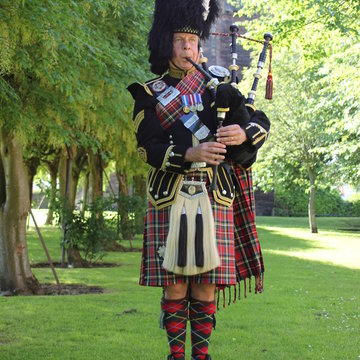 My name is Kenneth McBride and I started MyBagpiper in order to provide high quality, reliable and professional performers for weddings, funerals and events. I have over 45 years experience playing the bagpipes as both a soloist and in pipe bands at Grade 1 level. The bands I have been a member of include Monktonhall Colliery, Prestonpans Royal British Legion, Scottish Gas Caledonia, Lothian and Borders Police and Shotts and Dykehead Caledonia. During my 23 years with Lothian and Borders Police I served as both Pipe Sergeant and Pipe Major for a number of years. I also served as Secretary which meant dealing with the day to day running of the band such as organising events, uniforms, travel and accommodation services for all the band. Throughout my time I have played at an innumerable number of weddings, Burns Supper, funerals, corporate and high profile engagements including – Royal Edinburgh Military Tattoo in Edinburgh and Australia, The Pope’s Christmas concert in the Vatican, Moulin Rouge in Paris, numerous tattoos in Germany, France, Denmark, Spain, USA, Canada, Australia and Scottish/Music festivals in Russia, Italy, Czech Republic, Indonesia, Sardinia and Belgium. I am the resident piper for the MacDonald Marine Hotel and Scottish Evening Show at the Royal Scots Club. Myself and three of my colleagues also perform as part of a Scottish Show on board some of the cruise ships. I regularly play for the Royal Company of Archers and during these performances have performed for Royalty including HM Queen Elizabeth, Prince Charles and Princess Anne. I am currently a member of the Piper’s Trail Pipe Band which performed at the Royal Edinburgh Military Tattoo (2017 and 2018), Düsseldorf Military Tattoo (2017 & 2018) and British open day in Prague (2018) Lastly I am a member of the Eagle Pipers Society which meets every 2nd Tuesday in the Scots Guards Club in Edinburgh, so if you want a chat or hear me play contact me and I’ll arrange a time and date. Hope to hear from you soon.

Any bagpipe tunes plus modern/contemporary tunes which are capable of being played on the bagpipes.
Popular tunes include
Weddings -
Highland Cathedral,
Can you see the love tonight,
The Rose,
Mhari’s Wedding,
Braveheart,
Love of a Princess,
Scotland the Brave,
Caledonia,
Tiree Bridal Song etc
Events -
quick marches, hornpipes, reels and jigs etc.
Burns Supper -
A man’s a man for a’ that,
My love she’s but a lassie yet,
ye banks and braces,
Auld Lang syne,
Corn Riggs etc.
Funeral -
Flowers of the Forest,
Dark Isle,
Over the see to Skye,
Sleeping Tune etc.
Customer questions

I am always flexible to help ensure your event runs as smoothly as possible. If timings change in the run up to the event just let me know. I’ll call 1 week to finalise times etc but if they do change on the day of the event I will oblige and adjust the timings.

I usually arrive 30 minutes before the start time just to do a quick recce of the venue. I only need 2 minutes to ensure the bagpipes are in perfect tune.

I can play hundreds of tunes which include all the usual and well known traditional and contemporary tunes. I will be able to play any tunes as long as it is compatible with the bagpipes. I am always happy to discuss what is required to ensure you have a fantastic event and if needed can advise of specific tunes and sets.

Yes, absolutely! I bring my own bagpipes which are silver mounted.

I will be able to play any tune as long as it is compatible with the bagpipes. If I have to learn any special tune I am happy to do this at no extra cost.

Choice of uniform - Full Highland uniform with feather bonnet or kilt, jacket and shirt and tie. Choice of tunes. Flexibility, reliability and quality.

5 out of 5
21 verified reviews
Satisfaction

EB
Elaine B
4 months ago

Kenny was excellent on time everything I asked for took everyones breath away in the chapel.My mum would have loved it💕

Thank you for your kind comments.

DB
Daniel B
5 months ago

I was really happy about the result of my engagement.

Kenny was fantastic at our wedding. Can’t recommend him enough.

We were so pleased with everything Kenny provided on the day. He played while all the guests arrived, played us back down the aisle and even offered to stay a bit longer to play whilst we went outside for confetti. He was in touch a couple of times during the booking process to make sure He undedstood what we wanted and was lovely to work with throughout.

SF
Sioned F
2 years ago, for a Wedding in Nackington Rd

We just wanted to message and say thank you so much for playing on the day. The tunes sounded brilliant and we were so pleased with how it all turned out. Thanks as well for being so professional and adding that extra special element to our big day. Best wishes for a happy and prosperous new year! Mr and Mrs Brown

NE
Nicola E
3 years ago, for a Wedding in 1 Gelvan Moor Rd

I just wanted to say a very BIG thank you for doing such a wonderful job piping at our wedding on Saturday at Tullibole Castle. We really couldn’t have asked for a more perfect day. What a professional you are! You looked terrific in your choice of outfit, we loved your choice of tunes you played and you really did do us proud. Everyone was Raving about how charming and nice you were I’m just sorry we didn’t get to speak with you more. Five star service from the point of booking and on the day! Thank you so much. Best wishes Finlay & Nicola MacPherson