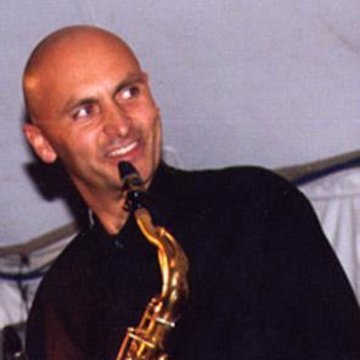 Kelvin has been immersed in Soul, Blues, Jazz and Latin for years. Performs internationally as a SOLO SAXOPHONIST with backing tracks.
3 of 14 photos
Saxophonist
Twickenham
Public liability insurance of £10 million
Verified profile

Careless Whisper
Pick up the pieces
I wish
Baker street
Billie Jean
Mr Magic
Don’t you worry ‘bout a thing
Ain't no sunshine
Superstition
Moondance
On Broadway
Estate
Golden Lady
Just the two of us
Girl from Ipanema
Isn’t she lovely
Strangers on the Shore
Tequila
Take 5
Sir Duke
Always there
Lovely Day
Morning Dance
In a mellow tone
Summertime
Over the Rainbow
Round Midnight
Body & Soul
You, the night and
the music
In a sentimental Mood
Tuxedo Junction
Desifinado
I’m in the mood for love
I can’t give you
anything but love
Bring me Sunshine
Star Eyes
On the sunny side
of the Street
Don’t get around
much anymore
There will never be another you
Wave
You are the sunshine
of my life
Georgia
Ain’t misbehavin’
Bye Bye Blackbird
Black Orpheus
All of me
Autumn Leaves
Fly me to the moon
It’s only a Paper Moon
One note Samba
When you’re smiling
Theme from The Godfather movie
Take the A train
Lullaby of Birdland
Customer questions

Always try to be flexible.

Yes we will try, or let you know if it wouldn't work with the instrumentation. If the piece is involved and no music is provided there would be charge which can be discussed beforehand.

To blend in and enhance the atmosphere

Standard Prices
All prices include:Independent PA system with backing tracks, which can fairly loud or quiet. If you wanted your own selection of MP3’s played through my system that be fine, for when I am not playing, that would be fine if you can provide an MP3 player or phone.

Verified
Lisa B, 6 days ago

Kelvin was fantastic. He arrived in great time, played longer than scheduled, captivated our guests and created a perfect atmosphere. Kelvin was also creative, helpfully suggesting ideas to help the party go with a swing! I would highly recommend him.

Awesome surprise for our daughter. Could not have been better, thank yiu

Amazing. We had a garden party for about 100 and Kelvin was great. A very professional and talented musician who contributed greatly to the success of the evening. Varied repertoire to suit all ages and he proved very popular with everyone. Can't wait for another occasion when we can engage him

'I first heard Kelvin & Egon performing in Sloane Square, London and was blown away by the ambiance they were delivering. They kindly came to play at my event in Norfolk in front of 500 people and produced an epic 2 hour performance. They have a subtle knack of getting people moving and lifting the atmosphere of an event through both amazing musical talent and a physical presence. I could not recommend these cool dudes more and will 100% be having them at my next event!'.

We chose Kelvin for my daughter's 17th birthday. An intimate celebration where Kelvin was super discreet and professional throughout. He was attentive and creative when planning the set list. A smooth and thoroughly enjoyable evening and I have no qualms recommending him and his saxophone!

We booked Kelvin for our wedding day and he was fantastic! Us and all our guests loved dancing along to him playing. He even played our first dance song that we requested. Kelvin is very entertaining playing on his own. We had him outside and he filled the atmosphere with beautiful and joyful music! I recommend booking Kelvin for any event and especially for your wedding day. We never thought of a booking a saxophonist until we heard Kelvin and he's even better live. The best idea and choice we made and a wonderful treat for all our guests.

'A Big Thank You to Kelvin Christiane Brilliant All Star's Big band who played at my wedding and helped to make it one of the most special days of my life. With stunning musicality they played an amazing variety of wonderful Jazz standards and also some arrangements that I had written especially for the occasion which featured my Best Man and Best Lady. Vocalist Lesley Christiane added sultry vocals and fun filled drama that had everyone dancing and enjoying themselves..absolutely unique and brilliant way to celebrate a truly wonderful day.

A Big Thank You to  Kelvin Christiane Brilliant All Star's Big band who played at my wedding and helped to make it one of the most special days of my life. With stunning musicality they played an amazing variety of wonderful Jazz standards and also some arrangements that I had written especially for the occasion which featured my Best Man and Best Lady. Vocalist Lesley Christiane added sultry vocals and fun filled drama that had everyone dancing and enjoying themselves..absolutely unique and brilliant way to celebrate a truly wonderful day.

I’ve been promoting Jazz Shows for many years and booked Kelvin as often as possible. He is incredibly talented, versatile and entertaining - and certainly one of UK’s best sax players. He is also a pleasure to work with so I would recommend him to any potential customer.

I recently booked the Kelvin Christiane Quintet featuring lady vocalist Lesley Christiane for a 50th Birthday party. Their entertainment was excellent and many guests commented how much they enjoyed the performance.. I would thoroughly recommend the band to any potential clients.

Kelvin and his bands have played regularly at my jazz events over many years and have proved to be very popular with the audiences. They play uplifting music and cater to the requests of the clientele. I highly recommend them.

Kelvin's jazz band has played at our annual fundraising event for several years. They are very popular and create such a great atmosphere for this mainly family setting...with lot's of great well known jazzy tunes and also some to dance to. They are also very personable. I highly recommend them.

Kelvin Christiane’s Jazz Quartet have become the mainstay of the summer picnic at Pensford Field. We are always keen to welcome them back. This year they played to around 200 picnickers and provided two hours of great jazzy tunes and created exactly the sort of relaxed atmosphere that a summer picnic deserves. I would have no hesitation in recommending them.

I have been booking Kelvin to play at my Sunday evening jazz residency for over 20 years and he has always delivered an entertaining gig which goes down very well with the audience, many of which are his own fans who regularly travel to see him play. His music is upbeat and he always tries to accommodate any particular requests that might be asked of him by the audience. Kelvin is one of my 'go to' artists who I will book without reservation, and so I would definitely recommend him and his band for future engagements.

' Kelvin played saxophone at my Birthday party and thoroughly entertained everyone. He plays a huge range of Jazzy material and some more up to date funky tunes. He is a very accomplished musician and a very affable person..'

Accomplished reed man Kelvin Christiane has played with everyone from Don Weller to Bernard ‘Pretty’ Purdie. His playing on baritone sax and flute is high calibre jazz, with sweet boppish phrases and lush, velvety interpretation of melody, but his skills don’t end there — he also plays a mean tenor, as he demonstrated when he sat in with Simon Spillett’s quartet during a gig at the Home Guard Club in Sheen. The collaboration provided some wonderful unison sax with Kelvin and Simon playing in parallel, then going their separate ways, then reuniting. Kelvin Christiane’s was tone is rich and powerful, with great projection. He’s a fluid, elegant player. Simon Spillett and his vibes man Roger Beaujolais were grinning as he played. This was instant artistry of a very high order, from a unit who have never played together before.

Kelvin and Lesley Christiane and their band played for a fundraising event for the Ottakar Kraus Music Trust, that I am musical director of. Their work involved in this event was immeasurable and made the event a massive success. They even incorporated and featured one of the autistic students in their performance which made for unmemorable experience for the charity. I would whole- heartedly recommend them.

Coljazz Promotions have had the pleasure of employing Kelvin Christiane and his band many times, and have always been more than happy with his professional attitude, excellent musicianship, and way of engaging with his audience. Kelvin is one of the nicest musicians on the jazz circuit and our Jazz audience will always travel to catch him, when in town

Verified
Carol A, 7 years ago

' Kelvin's ensemble played at my rowing club during my birthday party and created a great atmosphere The music selected was wonderful which suited the venue and party. They play to a really high standard. ...with lot's thoroughly of Jazzy material....my friends loved them!