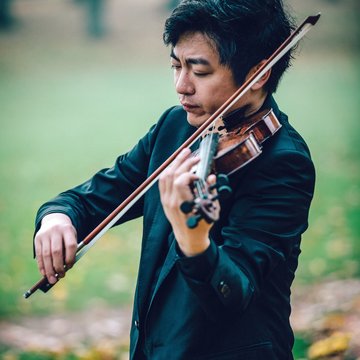 Kehan Zhang is one of the most promising violinist of the young generation. A graduated from the Central Conservatory of Music in Beijing and the Soloist Class at the Royal Danish Academy of Music in Copenhagen, studyed with Professor Serguei Azizian. He has given his debut concert at the Radiohus in Copenhagen, Denmark (2017), and his recital at Carnegie Hall in New York, USA (2018). He has released his album Paganini Piazzolla, available online. He has won dozens of violin competitions in China, including the highest National Violin Competition in Qingdao (2009) and the Golden Bell Award in Guangzhou (2011) As an active concert violinist, he has been widely performed in most of the major cities in China, and became the concertmaster and soloist of many orchestras and international festivals in China. He came to Europe in 2013. He has been performed in Denmark, Sweden, Norway, England, Germany, Austria, Spain, Slovakia, Serbia, USA. Besides playing as a classical violinist, Kehan also is devoted to discovering the relationships and nurturing the fusion between Chinese music and Western music. With Kehan’s talent for improvisation, he plays very often with groups performing ethnic Chinese music, jazz and folk music. He also plays baroque violin and viola in chamber groups. He has established the Nordic Strings Academy, based in Copenhagen, as a platform to organize music events and collaborate music performances.

Virtuosity, passion and sparking energy, as well as the beautiful and touch moments.

We could discuss and see if we could rearrange for you.

On the day of even, we prefer to have minimum 30 min to prepare before the event starts.

Yes, and you are welcome to order other pieces as well.

Yes, we will bring our instruments and music stands, except the piano.

Yes, absolutely. for solo or duo set up, we need to be noticed at least 2-3 days in advance. (Solo could be 1 day in advance.) Trio or quartet we need at least a week in advance.

We were very pleased with the performance from Kehan Zhang. It was an exceptional experience to see him play live and he really gave us all such a pleasant and breathtaking show.

Dear Kehan and Astrid, Here is a low-resolution video of one of the pieces Kehan played last night, the Czardas, whis was mindblowing, not only to me but to everyone. A big thank you to Kehan for sharing this wonderful music (all pieces!) with my family and closest friends. It made the evening truly special.