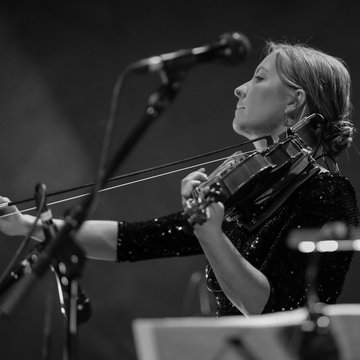 Cumbrian-born multi-instrumentalist Kathleen began learning music aged 3 when her mother taught her recorder. This was soon followed by piano and violin, and in her early teens she took up alto sax. Her formative years were spent playing in orchestras, ceilidh bands, jazz big-band, carnival band, and singing with choirs, enjoying a childhood frequenting folk festivals with her family. Kathleen went on to study violin at the Royal Northern College of Music. She then joined western swing band The Swing Commanders, with whom she sang and played fiddle, sax, and keyboard for several years, touring the UK, Europe, and the US (including Texas – the home of Western Swing). She has also built a reputation as one of Manchester's leading freelance violinists/violists, playing with numerous string quartets throughout the north of England. Her orchestral experience is considerable too, having worked with Lancashire Sinfonietta, and continuing to play regularly with Docklands Sinfonia, Gatecrasher Classical, and The Untold Orchestra. Kathleen is excited by musical collaborations, and has a wealth of studio experience writing and recording string parts for an array of hugely varied artists. Her exploratory nature has led her to work with performers of many different genres including Skutch Manos (punk-flamenco-prog), Simply Dylan (A tribute to Bob Dylan, not a Bob Dylan tribute) and Nick Hennessy (harpist & singer/story-teller). She regularly collaborates with Haystack Records (folk & trad based label) and is very much in demand throughout the northwest and beyond, writing string arrangements for studio recordings. Folk music has always been a big part of Kathleen's life, so she likes to get out to sessions, and enjoys gigging with local ceilidh bands The Mouse's Nest, and Head Over Reels. She now tours regularly with BBC Folk Award winners The Unthanks, having enjoyed a UK tour and full festival season with them last year, including a performance on The Pyramid Stage at Glastonbury. Kathleen loves working with children and is delighted to now be running Music Magic (formerly Classical Babies), providing music of all genres for parent and baby to enjoy in an informal setting with soft flooring and toys for the babies, and coffee and cake for the adults. A true music enthusiast, Kathleen loves to perform in a wide variety of musical settings, as comfortable playing with an orchestra or string quartet as she is singing in a jazz club. In her free time she loves to bake and knit, and is a keen runner & yogi.

We had the absolute pleasure of having Kathleen perform at our wedding in October. All the dealings we had before the wedding were prompt, and she really put our minds at ease with everything. On the day she was absolutely brilliant! We just asked for one particular song for the ceremony, and then whatever she thought after... She was fabulous, it really made the day. All the guests commented on how good she was. We would highly recommend.