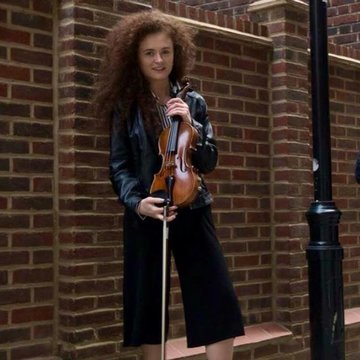 London-based Slovenian violinist and composer Katarina Kostrevc (born 1993) recently graduated in BMus Composition with a first class honours, and in MMus Performance with distinction (studying with Dona Lee-Croft). In May 2016 she also gained the Fellowship of the London College of Music award and received the Mona Blackman Scholarship. She began learning the violin at the age of six at the music school in Ljubljana and began writing short pieces for solo violin a year later. Katarina has collaborated and performed with many different musicians and orchestras all around Europe, and has participated at music festivals in Austria (Allegro Vivo), Minnesota, USA (Northern Lights Music Festival), Italy and France. She has attended masterclasses as an active participant with Igor Petrushevski, Pavel Vernikov, Tomasz Tomaszevski, Stephane Tran Ngoc, Jeremy Isaac, and has also achieved first, second and third award at the Slovenian National Competition for Young Musicians (2003 and 2006). Besides being an active concert violinist and performing as first violin in the Belgard String Quartet, she is pursuing a career in film composition, and in violin teaching. Katarina also has the experiences of leading the orchestras, such as the Allegro Vivo Camerata and LCM Camerata. Her performance venues include some of the main Slovenian concert halls, as well as St. Barnabas Church in Ealing, Acton Hill Church, Cadogan Hall in London and performances within the Ealing Film and Music Festival. As a composer, Katarina’s pieces have been performed by LCM students, the LCM String Ensemble, and in January 2015 her piece ‘The Sixth Element’ for string orchestra was performed at the Gala Concert of the Crescendo Music Festival in Florida. Her piece ‘Tunisian Crochet’, which was premiered by the Camerata orchestra, won the LCM Composition Competition. Katarina recently composed music for Melies’ film Trip to the Moon, including a large symphonic orchestra, for which she received an exceptional mark

Celebration, B, 4 years ago