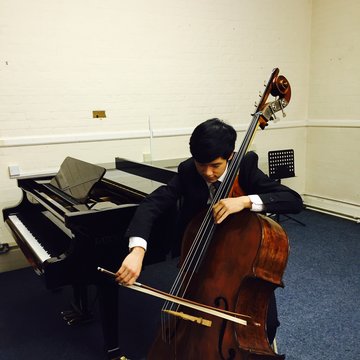 Kai is currently a Double Bass student under Graham Mitchell (Principal Bass at English National Opera) and Tom Goodman (Member of Bass section at London Symphony Orchestra) at the Royal Academy of Music, London. In 2011 Kai accepted a full scholarship at The Purcell School of Music to study with Neil Tarlton (Principal Double Bass at the Philharmonia Orchestra, London). Kai joined the Purcell Sinfonia as well as the Purcell School Symphony Orchestra, whom he has performed with at the Royal Festival Hall, Queen Elizabeth Hall and Watford Colisseum under conductors such as Paul Daniel, Colin Metters and Karina Canellakis. Later that year, Kai joined the London Schools Symphony Orchestra, where he continued working with high-profile musicians such as Nicholas Kraemar, Mats Lidstrøm, Louise Hopkins and Maria João Pires, regularly performing at the Barbican as well as taking part on tour to Rudolfinum Concert Hall, Prague. In 2013 and 2014, Kai successfully auditioned for the National Youth Orchestra of Great Britain. Throughout the two years, Kai has premiered works by Larry Goves, Unsuk Chin and Tansy Davies, and worked under distinguished conductors such as Francois Xavier Roth, Edward Gardner, John Wilson and Sir Mark Elder amongst others, whom he has worked with at several concert halls such as The Sage Gateshead, Snape Maltings, Birmingham Symphony Hall, Konzerthaus (Berlin) and the televised Proms at the Royal Albert Hall. In addition to Kai's orchestral commitments, he has been part of the Purcell School Chamber Choir, whom he has been able to perform with at St Martin in the Fields, St Paul's Cathedral and Westminster Abbey. As well as playing much orchestral and choral music, Kai has also greatly enjoyed his solo playing. He has taken part in a Double Bass masterclass with distinguished soloist and professor- Luis Cabrera, and has performed solo and chamber music concerts at prestigious concert venues such as Wigmore Hall, LSO St Luke's, St James Piccadilly and Milton Court Concert Hall. In 2016, Kai won the Arthur Felsenstein Award for solo performance and was also awarded a scholarship to study at the Royal Academy of Music, London.

Fantastic, Elgar 1 and Britten Interludes on one rehearsal, cannot recommend him highly enough, Kai really added a lot to the overall string sound with his fantastically musical and committed playing. Many thanks!

Excellent bassist. Lovely guy and great to work with 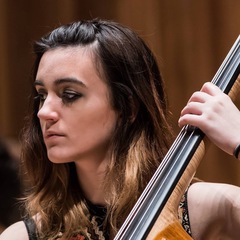 I have had the honour of working with Kai in the Purcell School Symphony Orchestra. His proffessional attitude towards every note he plays never fails to impress. He is a bassist who doesn't simply play, he shows respect and a deep understanding of how each note has an expression, a specific sound. Kai's technical and musical wisdom is far beyond his years and this dedicated musician shows a phenomenal amount of potential for the future.