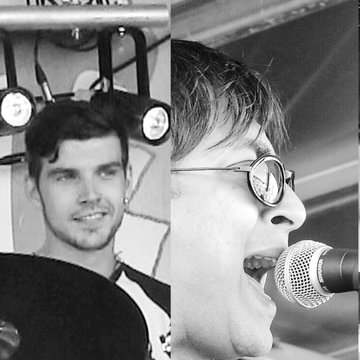 You only get out of something what you put in and we've worked timelessly crafting our songs so we're about due, follow our journey
Pop duo
York
Public liability insurance of £1 million

JOSEPH MICHAEL MISHRA Joe was brought up in musical surroundings, having older siblings who were already successful musically. Joe started playing the piano at the age of 10 and there were always guitars lying around the house, that he used to experiment with, so he was creating musical sounds from infancy. When the piano first arrived in Joe's family home, he felt he had been given a treasure chest of wonders, creatively exploring it's never ending melodic possibilities, purely by ear. By the time he began lessons his music teacher said that his playing by ear had far exceeded the starting point of his sight reading lessons, so Joe developed his jazz and blues piano improvisation. Joe has always sung in a variety of different choirs developing the ability to stretch his vocal range and sing sophisticated harmonies. In his teens he was asked to play for a folk group who needed a guitarist and Joe stepped up with a few basic chords under his belt. He soon had a full repertoire of complex chords with diverse rhythms, strumming and plucking techniques. Later Joe joined a band with his brother and played some amazing venues including the Streatham Festival to over 2000 attendees plus various large theatres including the Stratford East Theatre Royal and the Leicester Haymarket as well as the Birmingham Arts Centre and UCL As a singer songwriter, Joe began writing songs in his early teens about real life issues and emotions directly affecting him and the people around him. He found writing therapeutic, which meant his songs had a living soul of emotions that he discovered people could relate to. After the break up of his previous band 'Mighty Dreams', Joe embarked on a solo career and set up his own studio where he started recording a back log of songs he had accumulated. Having moved to the Yorkshire area at this point, he began playing solo at open mics, community centres and studio theatres developing a name for himself around York. His songs are accessible and melodic with tones of rock, jazz, and pop influences. Joe networked many excellent musicians and finally created KAYA along with Callum and Anthony and Joska. The band is launched, and now the sky is the limit... The story continues... ------------------------------------------- CALLUM FOSTER Callum was born into a musical family and began playing the drums at the age of 9. He started formal lessons at 12 and became a fluent sight reader, dedicating himself to mastering a variety of drumming styles from from Jazz through to Metal. His Uncle ran a Band and as a child Callum got his first taste of playing in public with them, teaching him the importance if a solid tempo and how to overcome performance nerves at an early age. Callum had been in several Indie, Pop Rock bands before he helped establish KAYA two years ago, along with friends that he met at York College of Music and York Saint John's University. He has played a variety of venues and is now a seasoned stage performer. Callum's musical tastes include Rock Hip Hop Dance and Pop. He has been inspired by the drumming of Ringo Star to Ginger Baker and Dave Grohl from the Foo Fighters, with band influences from Nirvana to The red hot chilli peppers, among others. He injects intensity and passion into the rhythm of KAYA. There were times when Callum believed it would be too hard to make a living out of music, and thought of getting out. The audiences at his first KAYA gigs, let him know that he could follow his dreams, and make a living in the Music Industry. Callum is waiting for his dream partner to join him on KAYA band tours and travel the world with him. -------------------------------------------

“One of the band members is an old friend of mine from school days so me and my brother travelled up from Birmingham to York especially to see them and catch up. I knew Joe was a good musician so I thought they’d be quite entertaining but I had no idea that they would blow my mind with the energy, musicality and passionate drive they show on stage! I’m now a regular follower of KAYA Band. Thanks for the music boys.” Kieron Burns. ————————————————— “....I first booked KAYA back in 2015, the band was instantly likeable. Booked for Staxtonbury they have been regulars ever since. A pleasure to work with, very committed to, and passionate about their music KAYA have always been reliable and I never hesitate in offering them a booking.” Graham - Blueskies promotions. ————————————————— “We were very pleased with the music at Camilla & Nick's wedding. The guests enjoyed the range of songs and we appreciated American Pie played for us as it is a particular favorite. Best wishes” Ian & Elizabeth Wilson. Parents of the bride. ————————————————— “We have been to numerous Kaya gigs and have always had the best nights out. Joe and his band always get us up dancing with both covers of classic favourites and a mix of their own original tunes. Joe is a fantastic musician with a versatile style. Their music appeals to a mix of age groups as he plays some of the older classics to perfection but also more modern covers. Joe is a talented guitarist and vocalist who has more than demonstrated a talent for producing his own incredible music too. We are always looking forward to the next gig and a taste of his new productions. Keep it coming Joe. Kaya rocks!” Nina Blake-James

I
Individual
5 years ago

“Kaya are a really entertaining band , they cover a wide range of musical tastes and genres. They played a few benefit concerts in Pocklington with very mixed age groups. Audiences enjoyed their sets of covers and own compositions . A good time was had by all!” > Margaret Murray - Pocklington