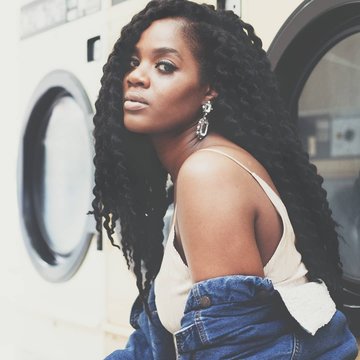 London may be the hub for the music industry but it looks like people's attention is soon to be turning to the East Midlands for some new UK talent from JUSTENE. The Leicester native singer/songwriter is bringing a distinctively fresh sound of contemporary RnB tones with a sensual edge that delivers an undeniably real approach to modern music.  From growing up in a heavily musical family of seven, Justene's involvement in exploring her talents as an artist came naturally. Barely through primary school, she was expressing a passion for performing whether it was singing in a tribute Spice Girls band in the playground with friends or practising riffs and harmonies with her brother, Justene was preparing to take to the stage.  And rightly so, as the aspiring singer was surrounded by a record collection full of the greats. "As a child, I was inspired by artists that my mum played around the house. There was always a lot of gospel - Kirk Franklin/ Fred Hammond/ CeCe Winans - as well as RnB girl power anthems from the likes of Brownstone, En Vogue, Toni Braxton and Whitney Houston." All grown up and with many experiences behind her, Justene is able to draw from situations and emotions to compose a song that is not just worthy of your undivided attention but will no doubt grab it. Now Justene is ready to take those next important steps in her career. With her empowering lead single 'Queenin' released in July, followed by her sassy song 'Glow', Justene is pushing boundaries to becoming a key stand out member of modern music. With this girl, you're either on board or can be made to be. Available to sing cover songs, originals or a tailor made song written just for you** **Additional costs

Verified
Rosiji B, 2 years ago

I held a Christmas Dinner for the homeless this past weekend and Justene sang familiar Christmas carols. She made the occasion that much more special and festive and it was for a lovely cause, especially for people who find themselves isolated at this time of year. Thank you again.

Justene was amazing. She really set the ambiance for the evening and the guests loved her! I would book her again and again and again! Such a beautiful voice and soul!

I wanted to do something special and different for my mum for Mother's Day so I booked Justene to sing for an intimate gathering with friends and family. She went above and beyond for us and it really made my mum feel even more special.