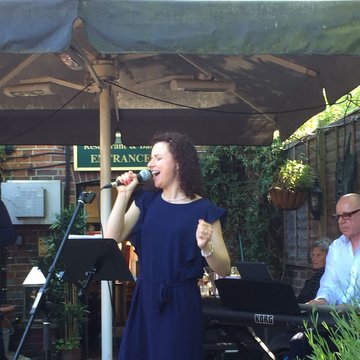 About Jupiter and Mars

Sharon Coutanche - Vocalist Sharon Coutanche is from the island of Jersey. From the age of 12 – 18, she received classical vocal training and was a prize winner for Classical Singing for numerous years at the Jersey Eisteddfods. Sharon performed in numerous Amateur Productions and sang with the Jersey Junior Youth Choir and The Holmchase Singers. At 12 she played the part of Annie Mary in the N.Y.M.T’s Production of ‘Once upon a War’ at the Jersey Opera House and was invited the following summer to perform at the Edinburgh Fringe Festival. At 18 Sharon trained for 3 years in Musical Theatre at Arts Educational, Chiswick, London. After graduating from Arts Educational, Sharon sung at the Royal Albert Hall in the Concert ‘Beyond the Barricade’ and played Cinderella for Pendle Production’s touring Pantomime. She has appeared in several short films, including ‘Suave Bastard’ produced by Stuart Fenegan which was shown at the Cannes Film Festival. She understudied Cinderella and was in the Ensemble in ‘Cinderella’ at Perth Theatre, UK. During 2000-2002 Sharon worked as a Singing Waitress at the Restaurant ‘The Naked Turtle’, Richmond, London, where she entertained customers with the Jazz Standards. In 2002 Sharon performed in the Musical ‘Little Women’ at the Bloomsbury Theatre, London. In 2003 Sharon taught singing to 6-18yr olds for Theatre Train and prepared them for their Motown Show at the Theatre Royal, Drury Lane, London. She also played various characters in a 2-Hander Theatre in Education UK tour with Quantum Theatre for Science. In 2004 Sharon played Aurora and Spider Woman in the Musical ‘Kiss of the Spider Woman’ at the Emery Theatre, London and Rapunzel in the Musical ‘Into The Woods’ at the Greenwood Theatre, London. During 2006-2008 she sang with the Hillingdon Jazz Orchestra and the Jazz duo ‘Smooth Edge’ at various venues, including the Annual President’s Reception at Surya, London, and Boris Johnson was the Guest of Honour. Sharon also Co-Produced and performed in a 2 Woman Show ‘Songs From The Musicals’ at the British Legion, Iver, raising money for Cancer Research. In 2009 Sharon collaborated with Musician and Producer Kevin Julien on a cover of ‘Everything’ by Chris Ford. Their version was chosen by 37 Track Recordings and Chris Ford for promotion. In April 2010 Sharon was invited by Songwriter Dave Charles to record his song ‘No’ at Berry Street Studio, London. From 2009-2011 Sharon collaborated with Musician and Producer Jon Beswick on original material. In recent years Sharon has gained a B.A. Hons in Performance Studies from City University London, sang with the band Joyrig, which were featured on The Organic Music Sequence on 22.01.2018 on Wycombe Sound, and sings regularly with the Heath Singers. Sharon has always loved singing the Jazz Standards and began work on her Jazz Duo in 2017 and is thrilled to have George on board for this new venture. George Stokes - Pianist George Stokes is an accomplished pianist with over 40 years’ experience in the music industry. From 1977 to 2003 he worked in retail demonstrating the latest electronic organs and keyboard products. During this time George gigged with various bands and participated in recording sessions at Sarm Studios. In recent years he has accompanied vocalist Mel Von Drau playing at venues including Berkeley Square and Park Lane Casinos. During 2016 and 2017 he toured with an Elvis Presley Tribute Show and with the Country Band ‘3rd and Lindsey’. Having decided to have a break from playing in bands he has returned to his first love, solo piano, and is now delighted to be working with Sharon.

Jazz Standards
Ain’t Misbehavin’
All Of Me
All The Things You Are
Alright, Okay, You Win
Autumn Leaves
Bewitched
Blue Moon
Can’t Help Lovin’ Dat Man
Come Fly With Me
Cry Me A River
Don’t Know Why
Fly Me To The Moon
I Got Rhythm
Let There Be Love
Moon River
My Favourite Things
Over The Rainbow
Quiet Nights Of Quiet Stars
So Nice
Someone to Watch Over Me
Summertime
The Girl From Ipanema
The Lady Is A Tramp
The Look Of Love
They Can’t Take That Away From Me
Unforgettable
When I Fall In Love
Popular Standards
Make You Feel My Love - Bob Dylan
All Of Me - John Legend
Sweet Dreams - Eurythmics
(They Long To Be) Close To You - Carpenters
Killing Me Softly With His Song - Fugees
Both Sides Now - Joni Mitchell
Stand By Me - Tracey Chapman
Customer questions

Line-up is vocalist and pianist

Please let us know asap as we can change the arrangements.

We require 1 hour to set up.

Yes if given enough time

Standard Prices
2 musicians
All prices include:PA equipment, set up. We can provide up to 2 x 45mins of live music
Packages
Drinks reception2 musicians
Two performances of up to 45 mins each during your drinks reception
£500

Sharon and George performed a wonderful set at Bull Rodizio Bar on Friday 20th July 2018. It was a really lovely atmosphere and our customers enjoyed a fab evening of Jazz with George on the piano and Sharon’s amazing vocals. Bravo! Tracey Wilsmore - Bull Rodizio

Sharon sang at our wedding and we were very happy that we found her, as her voice is strong and powerful, she sounds amazing and is very professional and approachable. Pleasure to deal with and to listen to! Our guests were wonderfully entertained and were very complimentary about the singer and the band.

Sharon sang at our wedding ceremony and she did an amazing job. Sharon was friendly, open for ideas and she has a fantastic voice. We highly recommend her.

Dear George, We wanted to take the opportunity to thank you for the amazing music performed at our wedding on August 13th 2016 at Woolston Manor. Thanks to you we had the exact music that we wanted, played at the exact time we wanted and your standard of music was amazing. We have had many complements on your presence and would certainly recommend you for anyone planning a wedding or event.

Jazz duos in the UK