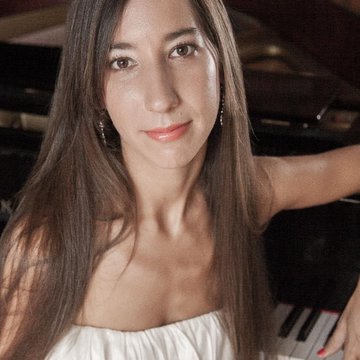 Argentinian pianist based in London. Classical, tango, rock, pop, folk. Experience performing in many venues around Europe and Argentina.
3 of 13 photos
Pianist
London

Julieta Iglesias was born in 1985 in Buenos Aires. She started her piano studies in 1995 at the “Alberto Williams” Conservatoire. In 2001 she received the “Lía Cimaglia Espinosa” scholarship and the Santa Cecilia Medal. Since then, she has been performing in important halls in Argentina, Spain, Germany, France, Holland, U.K., Poland, Sweden and Hungary. Julieta graduated from the "Instituto Universitario Nacional del Arte" where she studied under the guidance of Professor Aldo Antognazzi. She also taught Piano for two years at the same institution. Last year she got a Bachelor of Musical Education from "Conservatorio Superior de Musica de la Ciudad de Bs. As. 'Astor Piazzolla'". In 2005, Julieta won a Mention at the Piano Competition of the Northlands Institute and in 2009 she was invited to participate in the “1st National Festival of Pianists” in Mar del Plata, Argentina. In that opportunity, she performed at Colon Theatre and gave piano and chamber music masterclasses at the “Luis Gianneo” Conservatoire. Julieta has been working with many contemporary composers. In 2010, she gave the Première of the piano works by Mauro de María and also released Volume 1 of de María's music, to critical acclaim, and in 2012 she gave the Premiere of Vol. II. Her large repertoire also encompasses tango. She has performed with the London Tango Orchestra, the Trio Escualo, the Trio Abril, as well as solo piano. During 2017 and 2018, Julieta presented her “Hommage to Piazzolla” in many venues in Buenos Aires, London and Stockholm. Nowadays, she lives in London and performs concerts around Europe.

Verified
Melisa B, 2 years ago

I have recently hired Julieta for my birthday party. It was a family reunion and also a few friends came along. So I knew I'd have people of all ages. All I can say is that she stole the show! Juleta is such a great player, and very experienced over a variety of genres. From classical to rock, and even tango! She also offered us a little surprise. With all the hype that the Freddie Mercury movie got these days, Julieta pulled a few of his songs under her sleeve that night. Everybody was amazed and even a few people danced to the music!

My name is Virginia Rossi I' m a fashion show producer and I hired Miss Julieta Iglesias in two events: In 2015 " Six O' clock Tea" in the Spain Embassy and in 2016 " Six o' clock Tea in Punta del Este " in Uruguay. She was very professional and offered a great performance. I would really like to highlight that she is very talented and has a varied repertorie to offer: tango, classical music, rock & pop.