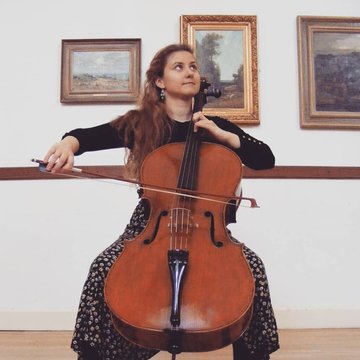 Julianna is a bright young cellist, currently looking for work around the UK.
Cellist
Cardiff
Public liability insurance of £5 million

Julianna began playing the cello at the age of six. She studied cello performance and music theory for two years at a music school in Łódź, Poland. In 2010 Julianna became a student at Chetham's School of Music in Manchester, where she regularly participated in solo, chamber and orchestral projects. Masterclasses with incredible cellists such as Raphael Wallfisch, Rebecca Gilliver, Hannah Roberts, and Francis Gouton, have truly transformed her view and way of playing. Taking part in a Frank Sinatra Tribute Concert, a Richard Rodgers and Hammerstein Celebration concert series as well as working with the singer Beverley Craven, have inspired her to exlpore different genres of music. Julianna's classical experience includes a co-principal seat with the Rehearsal Orchestra in London, as well as side-by-side projects with the BBC National Orchestra of Wales and the Manchester Camerata. Julianna is currently studyig at the Royal Welsh College of Music and Drama, under the tutalage of Alice Neary. During her studies she has been part of multiple collaborations with ballet dancers, jazz students and participated in a concert performed in complete darkness.

A cellist with an excellent technical command...self- motivated, enquiring, and brings a serious attitude to her studies

AM
Audience M
6 years ago

I was holding back the tears in my eyes