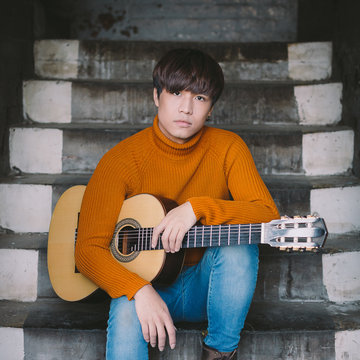 Julian Liu Born in Hong Kong and educated in England from the age of 14, Julian Liu is an active classical guitarist currently based in Manchester undertaking a Master of Music in Performance degree at the Royal Northern College of Music, studying with internationally renowned guitarists Craig Ogden, Rory Russell (Aquarelle Guitar Quartet) and Tom McKinney. Julian began his musical studies on the electric guitar at the age of 12, and he was introduced to the world of the classical guitar at high school in Norfolk, which has since been his passion. Despite this late beginning on the classical guitar, Julian achieved his ABRSM Grade 8 exam after only one year of studying the instrument. Within the same year, he has also acquired the ABRSM Grade 8 music theory and a guitar performance diploma. After secondary school, Julian undertook a Bachelor of Arts degree in Music at Keele University graduating in 2018 with First Class Honours, and with a score of 90 in his final year recital. While completing his undergraduate study, Julian was the receiver of the Elizabeth Montfort Instrumental Scholarship for two consecutive years and has received the Jim Roberts Memorial Prize on graduation. Since he began his study at the RNCM, Julian has been giving recitals throughout the UK, including solo performances for the Crantock Chamber Concert Series in Cornwall, Buxton Opera House Lunchtime Recital Series in Derbyshire, and Light Classics Recital Series in Lancashire. In March 2019, Julian's recital in North Yorkshire for the Classical Cleveland Recital Series was reviewed by the newspaper Darlington and Stockton Times, where his performance was described as "nothing less than beautiful". Julian has participated in masterclasses with international artists including Xuefei Yang, Gary Ryan, Zoran Dukic, Julian Byzantine, David Leisner and has attended the National Youth Jazz Collective Summer School in 2015. Julian has also entered and reached finals in multiple competitions, including the Leicester MusicFest Guitar Competition and the Ivor Mairants Guitar Award. Julian plays a 2017 Yulong Guo special koa concert guitar.

An exceptional recital of consistent quality performed entirely from memory. Technically accomplished throughout, the performance was most communicative with an often compelling narrative present in all of the repertoire.

Thank you so much for playing at my Celebration Dinner last night! The sound of your guitar, and the music chosen, created a wonderful ambience in the Great Hall, which was commented upon by many of the guests.

Beginning with a fairly dramatic, yet restrained, opening section, which he performed with the level of confidence associated with a player of greater maturity, Julian then launched into what could be described as a veritable musical tour de force.