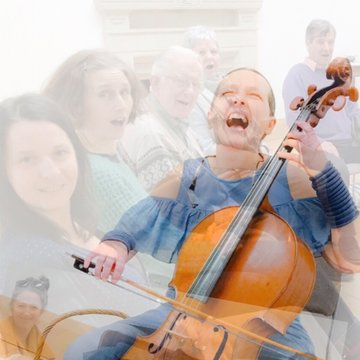 Check availability and get a free quote now - no commitment to book
From£180
Watch & Listen
About Julia
Reviews
Home page
Julia Palmer-Price
Like Julia?
Watch & Listen
1 of 1 video
fullsizeoutput_39c1

Ceremonial cellist and Songstress Julia arrived in Malvern after playing Jimi Hendrix with Nigel Kennedy in 1999, the pinnacle of a colourful career. Having built bands, run clubs and sessioned in London, recording and touring for 15 years, Julia settled happily in the hills, raised a family, began to develop a Cello’Scool and concentrated on her own compositions . Wondering how to create more cello pupils, in November 2016 Julia launched SongS P A C E, a class conceived to create mini musicians with the added bonus of forming a community of family singers for her soulful sing-a-long songs! Julia continues to perform regularly for all sorts of folk and special occasions, has recently acquired a loop-pedal and is currently recording an Album of songs for release in 2020!

Verified
Pamela B, 1 year ago

We had a lovely time and Julia was very professional but also created a relaxed and friendly atmosphere.

I booked Julia to play at my wedding on 22nd June 2018 and can honestly say that everyone thought she was absolutely fantastic!! We had asked for a mixture of classical music along with contemporary pieces. On the day Julia had found a way to transition our songs beautifully one after another. I do hope your wedding day is made as special for you as you made ours. Warm Regards The Badhams. x

"Thank you for making the long journey to Scotland to play such beautiful bespoke music at our Wedding. Everything came together to create a perfectly magical day the memory of which we will both treasure forever.

"Julia performs with ease and grace and such presence, we felt deeply in the zone during our marriage and everyone enjoyed her fun, off the cuff, party pieces enormously.