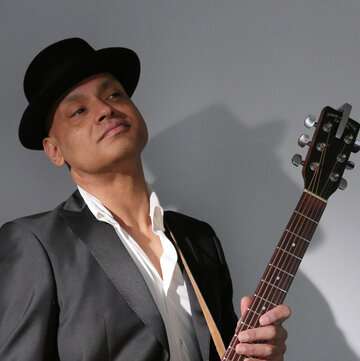 I have over 20 years' experience as a guitarist and vocalist with a broad repertoire.

Jules is an experienced professional guitarist with a wealth of live and recording experience. He is also a writer, composer and teacher. He plays a range of styles including soul, funk, jazz, rock and blues with an ever expanding repertoire. He has established roles in several musical projects and deputizes in numerous others. He has worked with a diverse range of artists including The Divine Comedy, Boy George, Sinead O'Connor, Carleen Anderson, Leon Ware and Noel McKoy. His influences as a guitarist include Robben Ford, Jimi Hendrix, Larry Carlton, Stevie Ray Vaughan, Grant Green and Nile Rodgers. As a vocalist, Jules is a powerful baritone with a repertoire covering James Brown, Van Morrison, the Doobie Brothers, Otis Redding and David Bowie.

Soul Funk Secret played our wedding on Saturday 18th November and were without doubt one of the highlights of the day! I have had so many people comment on how great the band were; Amy & I couldn't be happier. Brilliant music and energy throughout the night - We would 100% recommend! Thank you Marco & the whole band! Andrew & Amy Darby

Soul Funk Secret played our wedding on Saturday 18th November and were without doubt one of the highlights of the day! I have had so many people comment on how great the band were; Amy & I couldn’t be happier. Brilliant music and energy throughout the night – We would 100% recommend! Thank you Marco & the whole band!

We booked Soul Funk Secret for our wedding in Warwickshire on 14th April. They were fantastic. All the guests had a great time, and will remember the night for years to come. We found Marco really easy to correspond with – arranging set list and details couldn’t have been easier. We’re really grateful to the whole band for helping make our big day really special. James & Ruth

We hired Soul Funk Secret for our wedding in London on Saturday 24 October. They absolutely made our night – all the guests have told us how amazing and funky the band were – they literally had the whole wedding reception on the dancefloor. Thankyou so much Marco, Sulene and the rest of the SFS crew for making our wedding reception so memorable. Can\’t recommend you highly enough. We’re already planning an anniversary party so we can do it all again :) Dan and Carly Sargeant 4/11/2015

I book the SoulFunkSecret for my 40th party last night……..well, today my phone was constantly busy with messages saying: ” thank you for the fab night….we have never dance so much!!!” I’m in love with the band, and I will definitely book them again!! Thank you Marco!!! You have made my night a special one!!!

What a party on 28th March 2015! Thanks to Soul Funk Secret it was the best anyone could remember. All the guests commented on how good the band was and how much they enjoyed themselves. Keep music live! The whole night was fantastic, thank you so much for everything. We hope to see you again soon.