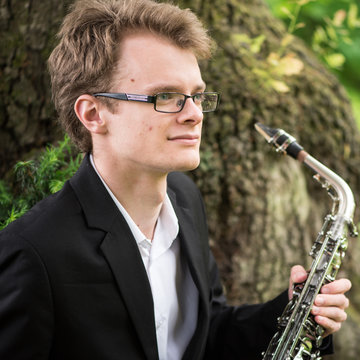 Josh Wakeham is a saxophonist & composer influenced by Cannonball Adderley, Dexter Gordon, and many others. A diverse performer, he has performed to thousands of people in Pop & Soul bands, held residencies in night clubs, and is part of London’s busy jazz scene. Born and raised in a tiny village on the edge of Dartmoor, Josh started playing music at 6 years old, but it wasn’t until he first heard Cannonball Adderley in his teens that his love for jazz and improvised music truly developed. Not long after this, a completely improvised piece that Josh performed with friends appeared on BBC Introducing. Since then his career has taken him all over the country and into mainland Europe. He has performed in numerous jazz groups, from small combos to big bands, including playing alongside Alan Barnes, making multiple appearances at the Montreux Jazz Festival, and touring Belgium in the Spring of 2018. His work is not limited to the jazz genre. He held a residency at Southampton’s Café Parfait nightclub for over two years, performing alongside house and guest DJs. He also performs in a variety of Pop and Soul bands. Highlights include performing with CJ Edwards (The Voice 2013) at the Bournemouth International Centre to over 5000 people. In 2020 Josh completed a master’s degree in jazz performance at Trinity Laban Conservatoire of Music and Dance, where he studied under Jean Toussaint and Julian Siegel.

Ours was a very short performance as we were surprising a friend by her front door to comply with social distancing. Josh performed a soulful birthday tune. He was punctual and easygoing. We were very happy with our choice.

Not only was the band absolutely amazing, seriously talented professional musicians and a really slick funky sound that will really get your party going, but also Grace and Ben honestly could not have been more helpful. They took the time to really understand what we wanted and talked us through all the options and their recommendations for our party and I have to say they were absolutely spot on. The evening was brilliant and we had so many comments about how good the band was. I would highly recommend them to anyone.

Lovely sound and highly professional to deal with.

So many of the guests commented on how much they enjoyed the band.

Saxophonists in the UK
Musical Directors in the UK