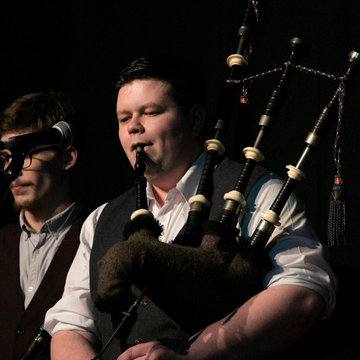 Bagpiper and Whistle player based in Newcastle Upon Tyne.
3 of 28 photos
Bagpiper
Newcastle upon Tyne
Public liability insurance of £10 million

Jordan is a Newcastle Upon Tyne based instrumentalist who specialises in Bagpipes, Whistles and Composition. Originally from Hebburn, South Tyneside he decided to move just a short way across the Tyne to study the Folk and Traditional Music Degree at Newcastle University graduating with First Class Honours in 2017. Since graduating in 2017 Jordan has been studying a Masters Degree with the focus in Composition at Newcastle University whilst, starting some of his own projects which are coming together to be released in the near future. In 2015 Jordan won the prestigious Danny Kyle award at Celtic Connections festival in Glasgow with his band, Pons Aelius, who have recently released their debut, ‘Captain Glen’s Comfort’. After cutting his teeth on the competition scene, Jordan developed a keen interest in the folk music of Scotland and Ireland. As a result, he has a comprehensive command of piping styles, ranging from the discipline of the military tradition, to the fieriness of playing tunes in a traditional music session. Based on this experience, Jordan has quickly established himself as a talented and renowned composer and interpreter of music for the Great Highland Bagpipe. To date, some of his performance highlights include playing alongside Andre Rieu; The Chieftains; piping for the Royal Family; piping for a NATO conference in Milan, Basel Tattoo; and Berlin Tattoo. More recently, Jordan has been piping across Europe and Australia in the Flowers of War concert series, which commemorates ANZAC involvement in World War One. As part of this, he has had the privilege of appearing as a soloist alongside the first ever combined French, British and German orchestras.

Jordan was very accommodating to our specific needs and performed without faulter. My only disappointment was that due to the nature of the event it was hard for the audience to show a true appreciation and in turn I personally couldn’t thank Jordan due to the dinner etiquette. Thanks again Jordan, now that we have your details it would be great to get you back on further occasions.

The last movement of the cycle should have been the Lux Aeterna and In Paradisum by Ross Edwards. His music encapsulated the distant sound of a sole bagpiper intoning the Lament for the Pipers Lost in the Great War by Major John Grant (1876 – 1971), played in the upper galleries by piper Jordan Aikin.

In another band, Aikin’s pipe part on ‘£75 Fine’ might be played on electric guitar