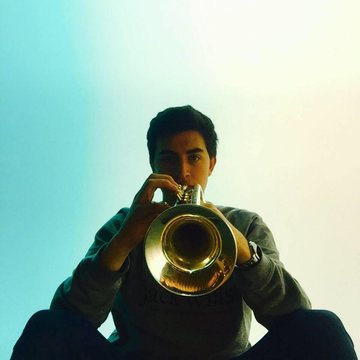 Jonny is a London-based Trumpet Player, specialising in Classical, Pop, Big Band/Jazz and Musical Theatre. He is currently studying a Trumpet Performance Degree at Trinity Laban Conservatoire of Music & Dance and is a regular player with Big Smoke Brass and many other ensembles around London. He is kept busy with shows, recording sessions and function events across the country and abroad. Jonny’s musical career started when he was given a Cornet at the age of 3. He joined Potters Bar Town Band and worked his way through the ranks to become Solo Cornet, he also joined Ware Brass and eventually became their Flugelhorn player winning their coveted Player of the Year award. During this time he was also involved with the Hertfordshire Music Service, playing in their Jazz Ensemble, Symphony Orchestra and Concert Band. He has performed at many prestigious venues including The Royal Albert Hall and Birmingham Symphony Hall. He has also been involved with multiple tours around Europe. Jonny went on to be awarded a place at Trinity Laban and continues to be a large part of their ensembles and projects.

ES
Elle S
2 years ago, for a Concert in Laban Building

Big Smoke Brass played at one of our Freshers’ events in September, and they were absolutely wonderful. The music was phenomenal, but equally their professionalism and efficiency were spot on. They made managing a very stressful event, considerably more enjoyable. I’ve already booked them for our Oktoberfest, and will be looking for other opportunities to employ them again. These boys are incredibly talented and deserve to go far. On behalf of Trinity Laban Students’ Union, thank you so so much for your brilliant performance!

WM
Will M
2 years ago, for a Wedding in Trinity Buoy Wharf

The Big Smoke Brass guys certainly know how to put on a show! Familiar and well-loved pop songs played in a way you definitely won’t have heard before. Thoroughly entertaining and never lacking in energy, enthusiasm and swagger. They clearly love playing their instruments and it shows. Dispense with the boring DJ or the covers band you’re thinking of and get them instead.