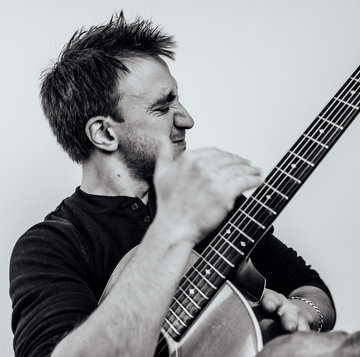 Having performed to George Benson in 2016, featured performing on primetime BBC1 programme The One Show in 2017, the honours of performing in Jimi Hendrix’s London Mayfair apartment in 2018 and performing for the reopening of the Apple Store Covent Garden as well as for Go ogle, alongside being invited to give masterclass sessions at Yamaha’s flagship EU store to name some highlights, Joncan is no foreigner on any stage, at any venue or in front of any audience. Playing an original whirlwind style of highly visceral, passionately charged instrumental solo flamenco/funk fusion, Joncan melds his appreciation for a spectrum of musical styles into captivating performances on a single acoustic guitar that sounds like an entire band. From the streets of Dublin, rooftop parties in Istanbul, the BBC studios in London, sun drenched mansions in Barcelona, grand hotels in India and anything in between, he captivates audiences anywhere he performs with his tenacity of performing style and musical energy. Joncan combines the athletic skill of percussive techniques with emotive, highly dynamic and groove-based playing – creating a visually enthralling element alongside an atmosphere that gets people moving and pushes an audience’s expectation of what an acoustic guitar can do.

No problem, plans change it's the nature of events . We will liaise and sort out a new schedule.

I can play music a little before my performance, in between sets, and potentially a little after performing for no charge. I can create a setlist based on a mood you want to go for, or you can also send over a Spotify Playlist for me to play. Music playing for longer than 10mins might incur a charge, all can be arranged.

30mins at minimum with 1 hour ideal.

My setlist is put together based on experience and the atmosphere desired but some flexibility is possible; I can also l

Yes, my Bose PA system caters for up to around 50 - 80 people depending on room size / outdoor area.

Possibly; I play a very specific style but am open to learning material on request - charges would very depending on the track and time required to learn it.

The passion of my playing and the uniqueness of the performance! Playing this style requires a lot of skill, stamina and energy - it comes through visually in the way I move and react while I play.

5 out of 5
15 verified reviews
Satisfaction

Great performance for a sunday lunch time in our venue. Will definitely have him again. Professional and super nice. Everyone seemed to really enjoy it.

Lovely audience and your staff were very welcoming too, was a pleasure and I look forward to more!

WP
Will P
7 months ago

Incredible and will definitely book again

Thanks very much Will.

Joncan was amazing. So talented.. I loved his music as did my guests. He was totally polite and professional too.. wish I could listen to him play all the time.

Thanks Polly and was a pleasure to play at your place that evening, thank you for having me and for the snacks!

Joncan is extremely talented, I highly recommend him.

Joncan’s performance was brilliant and crowd absolutely loved him. He has impressive guitar skills and something different from the other artists I’m used to see. He is also very interactive with the audience and easy to work with.

CK
Clayton K
2 years ago, for a Concert in Berlin

We have worked managing and sorting bookings for Joncan for awhile now and he does nothing less than stagger every audience he plays to. His playing is phenominal; you can't find better. He gives Rodrigo Y Gabriela a run for their money and we are very proud to work with him Worthy of note is also his professionalism, he goes above and beyond, and has an event focused mindset. Joy to work with. Book him!