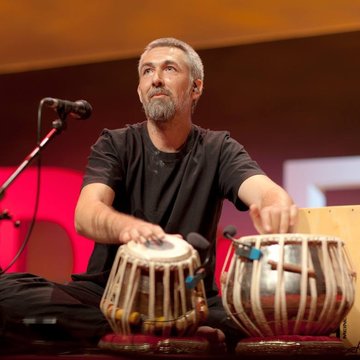 Please note: Currently not performing for weddings. We always try our best to be flexible to help ensure your event runs as smoothly as possible. If timings change slightly in the run up to the event just let us know

Can provide iPod service, not DJ.

We usually set up about 1 to 1.5 hours before the performance time. As soon as our PA is set up we can provide an mp3 playlist service to help set the atmosphere and get your guests ready for our live performance!” (venue responsible for any PRS notifications).

We're happy to chat through and make sure we find what works for your event.

Yes, when necessary (if the venue does not provide it) & required we can provide PA, microphones etc.

“Few percussionists, no matter how skilled, can captivate and keep an eager festival audience with a solo performance but Jon Sterckx’s stunning Drumscapes are a masterclass in control and rhythm that hook the audiences from the first beats and carry them through to an invariably ecstatic climax. Centred on the tabla, darabuka and riq (a Middle Eastern tambourine) Jon combines beats and rhythms from across the globe with cutting edge sampling and innovative vocal sculpting, building layered soundscapes that mix the experimental with the traditional and creating a uniquely intoxicating, exhilarating and, many say, trance inducing performance quite unlike any other.”

“Jon provides a unique journey through all quarters of the world built around his inter-continental range of drums: tablas, riq, darabuka, vocal percussion, and much more! He is the creator of magnificent soundscapes that will transport you into an unmissable musical nirvana!”

“This infectious and uplifting show is a masterclass in rhythm and control – whilst at the same time being a chance for the crowd to let themselves go and throw themselves into the wonderful world of movement and dance.”

“It was night of layered sounds and textures that transported the mind and imagination. Jon Sterckx’s drumscapes were the pinnacle of this sentiment. A revolving door of percussion instruments were played into his computer and spat out with an energising fruitfulness. The permutation seemed endless, the avenues that lay before us boundless and his performance understandably spoke of freedom. With a drum as big as the moon sitting on his knee he conjured up the image of a storyteller. While his sound spoke in a tribal voice that swelled in the pit of our stomachs. ”

“Jon Sterckxʼs performance brought a whole new dynamic to our event, it was stimulating and inspiring and the audience loved him.

“Jon has been a pleasure to work with and we loved having him as part of TEDxWarwick 2012. His performance was definitely the highlight of our event and watching 1000 people get up and dance to “Dhaginatak” will not be easily forgotten! ”