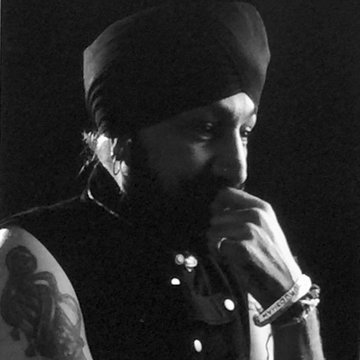 Kalsi was self-taught as a drummer when he joined a school jazz trio and they performed at school concerts and assembly hall meetings. His exposure to a variety of genres embraced both traditional Indian music and Western influences, and he began making Eastern drum rhythms using Western instruments; along the way he redesigned the traditional dhol drum to his own specifications. Early career In 1986, after leaving school, Kalsi joined a bhangra band called Alaap, and assumed the role of lead percussionist and dhol player for the band. In 1995, Kalsi joined an emerging world music organization called WOMAD. That connection served as a springboard for his career and exposed his talent to a global audience. He performed at a number of World of Music, Arts and Dance (WOMAD) festivals around the world. While performing at ceremonial weddings, Kalsi was encouraged to teach his techniques to others. He became the first dhol player to perform live with DJs, which appealed to younger audiences. Kalsi's first Dhol classes in Britain took place in 1989. No one had previously taught Dhol as an ensemble instrument. Kalsi self-funded his first tutorial classes in Slough, England in 1990. Kalsi worked as a session musician for Fundamental and Transglobal Underground during the early 1990s and later joined the Afro Celt Sound System. Kalsi took on the role and performed with the Afro Celt Sound System on their second album, Release, which also featured Sinéad O'Connor. During the time he was with Transglobal underground Kalsi and The Dhol Foundation provided support in a European tour with rock musicians Page & Plant. Later career In 1999 Kalsi's drumming troupe, The Dhol Foundation recorded their first album. The album was recorded live at performances around the world, absorbing the different musical influences of bands they toured with and contributed to their sound. Big Drum Small World, featuring a large photo of Kalsi on the album cover, was released on Shakti Records in 2001. The album received positive mention from critics. Kalsi drew upon his experience as a session player and his understanding of ethnic and western instruments to work as a producer for the album. . Peter Gabriel's label, Real World Records, recorded Kalsi's first album in 2002. Martin Scorsese's movie, Gangs of New York featured one of his songs, as did The Incredible Hulk. Towards the end of 2002, Kalsi worked with the teenage pop singer Avril Lavigne, when she recorded a cover of Bob Dylan's "Knockin' on Heaven's Door". It was sung by Lavigne at a War Child Charity Concert covered by MTV. Kalsi was selected to give the track an ethnic Indian feel and add some light percussion. In early 2013 Johnny Kalsi took The Dhol Foundation to perform for Stand up To Cancer. Johnny Kalsi is a member of the Sikh Welfare Awareness Team and each week he donates his time to feeding and clothing the homeless and people below the poverty line in central London. 2015 Kalsi received an Honorary Fellowship Degree from Leeds College of Music.

The Dhol Foundation Whilst some acts transfer well to TV / on-line viewing, others you can only truely appreciate live when your body shakes … we’re welcoming back The Dhol Foundation after they made such a huge impression to our 2015 and 2017 audiences. They’ve proved a real Wickham favourite so it’s another bhangra bonanza on Thursday 2nd August 2018. These guys know how to put on a stunning show … Wickham, you want vibrant enery? They’re back!!! We’re not sure any other festival could claim to have a bhangra based house band. On our opening night we’ll be welcoming some unique Indian culture to get us jumping on our feet something a little out of the ordinary but a real treat as master Dhol drummer Johnny Kalsi brings his band to Wickham. Best known for their rousing performance at the closing ceremony of the London 2012 Olympics, the Dhol Foundation have travelled the globe promoting the unique and indigenous sound of the Dhol drum to the masses. It is a sight and sound to behold so don’t miss it.

Dhols in the UK
Dhols in London
Dhols in Birmingham
Dhols in Manchester
Dhols in Edinburgh
Dhols in Liverpool
Customer Service
Discover
Company
As seen on
© Encore Technologies, Ltd.
Crafted with bagels and in London