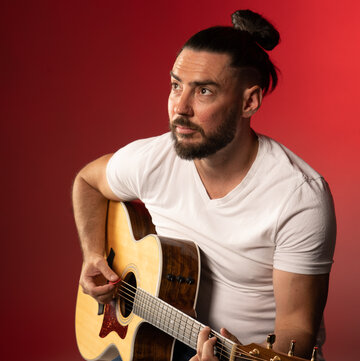 John McKinnie is an experienced, energetic and exciting Manchester-based singer/guitarist playing a fantastic variety of pop and rock songs.

John McKinnie is a singer/guitarist based in South Manchester. Originally from the Isle of Wight, John has been performing gigs regularly for 20 years and has a wealth of experience in playing a variety of venues and occasions. John has had experience playing all over the UK - now plying his trade from Manchester, John has residencies in a number of pubs in the South Manchester area and is an ideal choice if you are looking for someone who provides a slick, energetic performance. John is a performer who gives it his all every performance and his love for his craft is apparent to the audience (just check out the videos and see for yourself!) Playing a wide variety of hits from bands such as Oasis, Foo Fighters, Ed Sheeran, George Ezra, The Kooks, Van Morrison, 5ive and many many more - you can be sure that John's performances will leave your audience smiling and asking when they can next see him play!

An example of some of the songs in my current set lists:
The Killers - Mr Brightside
Roll With It - Oasis
Losing my Religion - REM
Castle on the Hill - REM
Naive - The Kooks
Brown Eyed Girl - Van Morrison
Keep on Movin' - 5ive
Hey Ya! - Outkast
New Shoes - Paolo Nutini
Times Like These - Foo Fighters
Stuck in the Middle with You - Stealers Wheel
Ironic - Alanis Morrisette
Sex on Fire - Kings of Leon
Lucky Man - The Verve
Sit Down - James
Not Nineteen Forever - The Courteeners
Paradise - George Ezra
Dancing with a Stranger - Sam Smith
Time of your Life - Green Day
Teenage Kicks - The Undertones
If This Ain't Love - Sophie Ellis Bexter
Talkin' Bout a Revolution - Tracey Chapman
Bad Moon Rising - Creedence Clearwater Revival
The Man who can't be Moved - The Script
Pompeii - Bastille
Customer questions

I can usually accommodate changes for timings and will always try to be as flexible as possible, in this case, please let me know as early as possible.

A minimum of 45 minutes is required for set up. However, I would usually like to be at the venue no later than an hour before start time.

I am happy to discuss specific songs from my setlist - at the end of the day it is your event and I want to make it as enjoyable as possible.

Yes - i have all top quality instruments and backline.

Time dependant, I will always try to learn a specific song for a special occasion!

WOW, solo performance to start the week off at Cowes IOW!!! Did this artist work hard with an excellent repertoire, soon had the crowd's attention for 90 minutes ending the set with George Ezra (paradise) which bought the whole place down, your welcome here anytime mate, this guy is well worth a visit to watch.

John played at my 30th this weekend and he was incredible! We had a big garden party and we picked quiet possibly the wettest weekend we possible could have! It chucked it down ALL day. But amazingly it didn’t stop John and he wowed the whole party. He just cracked on and turned what could of been a wash out in to an epic party! It literally felt like we were at Glastonbury!!! He was the WOW factor to my party and really made it so special. He even learnt my favourite Bastille song for the occasion to make it extra special. Would highly recommend John for any occasion where you want to have an epic time and lots of fun! Thanks so much John!

John played a friend's 30th birthday party and despite being told how good he was, I wasn't sure he was going to live up to my expectations, but... He was amazing! Such a professional, really polite and friendly, I loved how he put his own spin on some songs and the tone of his voice is just lovely. It was a real treat for the party and everyone commented how great he was. Can't wait to see him play again 👍