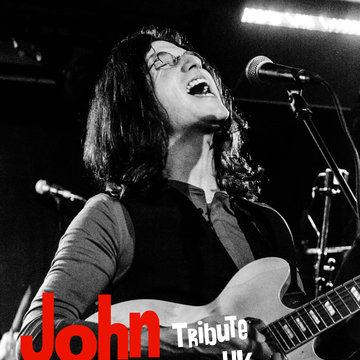 'John Lennon Tribute UK's show 'Lennon Retrospective' aims to take the audience on a journey through John Lennon's best loved songs starting with his solo work and culminating in the early Beatles classics. JLUK put on a two-hour, fully-costumed show ‘Lennon Retrospective’ covering Lennon’s best known solo work as well as classic Lennon-penned Beatles songs. The band is fronted by Lennon look-and-sound-alike Gaz Keenan. Gaz featured heavily in an ITV reality show The Big Audition to win through the auditions as the best John Lennon that was screened in October 2018. Since then Gaz has put together a professional band of musicians with many years experience playing theatre venues in leading tribute acts, and the Lennon Retrospective has been created to deliver wide appeal as well as a highly authentic Lennon/Beatles experience. Gaz Keenan is an accomplished musician with over 25 years of experience in the entertainment industry at varying levels. Gaz's passion for The Beatles and John Lennon in particular led to the conception of John Lennon UK - A Tribute to John Lennon. John Lennon UK aims to faithfully recreate Johns soulful vocals, his rugged and passionate guitar playing, Johns simplistic but beautiful piano work, his look, always so cool, his mannerisms, his accent and, of course - his caustic wit!! "No-one can top Gaz who looks like Lennon in his early years" The Daily Express

We are a five piece professional band but can offer solo performances, meet and greets etc.

We usually set up about 1 to 1.5 hours before the performance time. As soon as our PA is set up we can provide a free playlist service to help set the atmosphere and get your guests ready for our live performance

Our set lists are crafted from countless performances and learning what works best to ensure guests dance and have an amazing time. However, we're definitely happy to chat through and make sure we find what works for your event

We can provide PA and lighting at an extra cost which we are happy to discuss.

If a song isn't included in our song list there may still be a chance we already know it. If there is a special song you'd like us to learn we are happy to do this for you. There is a fee of £30 for this service to take into account rehearsal times etc

Our clients love our enthusiasm and attention to detail. We are the closest thing to John Lennon currently in the market.

We have played various theatres & Arts Centres around the UK & Ireland.

The Wharf in Tavistock. (So far)