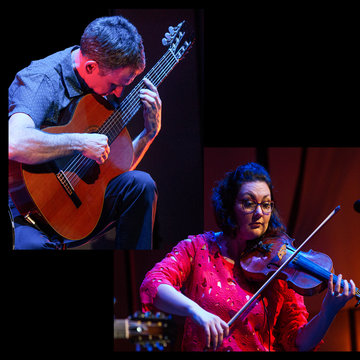 Rachel Jones trained at the RNCM; her first instrument is the viola followed closely by the violin. She is a member of the Royal Liverpool Philharmonic Orchestra and the Manchester Camerata. Rachel has performed at some of the most prestigious venues across the world including the Royal Albert Hall and the main stage at Glastonbury! Having studied classical guitar with Stan Yates at the age of 28, John has continued to charm audiences by masterfully swapping between steel and nylon string guitars. Faithful to his craft he has introduced many music lovers to an array of classical works by cleverly infusing these with more contemporary pieces. A regular performer at Liverpool's Anglican and Metropolitan Cathedrals and at the International Guitar Festival of Great Britain; his classical performances have not gone unnoticed beyond Merseyside with over 1 million views on his channel where his performances, in particular ... have been enjoyed, copied, discussed and even debated!

Cavatina; Why Worry, Albramha, If; Try to Remember; Cannon in D; Rod; Vincent; And I Love You So, Jig (Gary Owen); Make You Feel My Love; Rodrigo Guitar Concerto; Classical Gas; Isn't She Lovely; The Entertainer; Earl of Solsbury; Scarborough Fair; Love Story; Jesu Joy; Spanish Romance; Those were the Days; The Way we Were

John produces the best 'raw' rendition around of Classical Gas, and then just walks off like it was a stroll in the park - sheer class" Lynden Brain

String duos in the UK