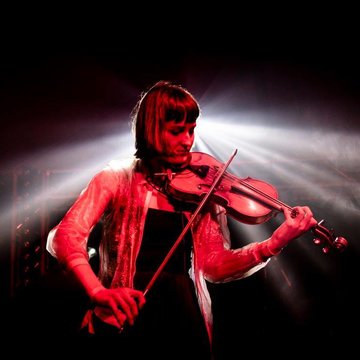 Jazz violinist/singer based in London but also comfortable with playing any other genres to make your event as special as possible!
3 of 11 photos
Violinist
London
Public liability insurance of £10 million
Verified profile

Johanna Burnheart is a German violinist, singer and composer. After studying classical violin, piano and voice during childhood, Johanna’s musical focus developed into jazz. Rather than following the path expected of a classical violinist, she chose instead to pursue the music that was her passion. The violin is still a rare instrument in the jazz world, so Johanna finds herself within a niche of a niche. Her playing does not reflect the traditional approach to jazz violin made famous by players such as Stéphane Grapelli or Stuff Smith but is rather inspired by the horn giants of the modal jazz genre. Much of her life has been spent absorbed in the Berlin sound of the techno & house scene resulting in this certain influence permeating her compositions. Johanna’s work exists at the point where modal jazz and techno meet. This is an ever developing venture as technology allows the acoustic sound of the violin to come alive electronically without compromises. Inspired by a diverse spectrum of teachers and influences, Johanna’s education has been multifaceted. From early beginnings at a music school in Northern Germany to becoming a “Specialist Musician” at the prestigious Wells Cathedral School, Johanna went on to participate in summer jazz programmes at Berklee College of Music in Boston, Dublin and the Guildhall School of Music and Drama in London. This total immersion into jazz at this point provided the impetus for her to change genres definitively. Upon this new path, Johanna spent two years in Berlin studying with some of Germany’s most renowned jazz musicians, with monthly trips to Paris for lessons with Didier Lockwood at his jazz school. Her love for the Berlin clubs and the music they represent was manifested during this time, forming the foundation of her current musical style. In 2013, she enrolled at the Guildhall School of Music and Drama in London as the first jazz violin undergraduate student of the school and graduated in 2017 with a Fellowship year to follow. Notable performances since her move to the UK were the Women’s Day concert with Tomorrow’s Warriors “Nu Civilisation Orchestra” debuting Yazz Ahmed’s Polyhymnia suite at Queen Elizabeth Hall in 2015, playing support for Pharaoh Sanders at Ronnie Scott’s with Rosie Turton in 2018 and a tribute show to the Blue Note Label at Queen Elizabeth Hall for the EFG London Jazz Festival 2019 in collaboration with Total Refreshment Centre. As well as being a regular member of Rosie Turton’s band, Johanna joined the up and coming London Garage Orchestra in 2019 and toured UK festivals with both projects that year including Glastonbury Festival, Boomtown Fair, Love Supreme, Jazz Re:Fest and Brainchild. Since forming her own band “Burnheart” at the end of 2018, Johanna has performed at jazz re:freshed, Spice of Life, Jazz in the Round and the Jazz Café with this project; the latter being an event presented by jazz re:freshed called “The Sounds of 2020”. The “Burnheart” debut album was released on Ropeadope Records in October 2020.

Classical Repertoire:
The Red Violin by John Gagliano
Bach Partita in D Minor Sarabande
Porgy and Bess by George Gershwin
Jazz Standards:
Ain't She Sweet
All by myself
All Of Me
All the things you are
A small day
Autumn Leaves
Beautiful Love
Blue Bossa
Blue Moon
Blue Monk
Body and Soul
Broadway
But Not For Me
Can't Help Loving Dat Man
Creole Love Call
Dark Eyes
Donna Lee
Douce Ambience
Falling in Love again
Heatwave by Irving Berlin
Honeysuckle Rose
How High The Moon
How Insensitive
I didn’t know what time it was
I Love You
I’m glad there is you
I fall in love too easily
If you never come to me
It don’t mean a thing
I’ve got the world on a string
Invitation
Let’s Do it (Let’s Fall in Love)
Like Someone in Love
Lover
L.O.V.E
Lullaby of Birdland
Make Someone Happy
Minor Swing
My heart belongs to Daddy
Naima
Night and Day
No Moon at all
No More Blues
On the sunny side of the street
Part Time Lover by Stevie Wonder
Purple Rain by Prince
Satin Doll
The Shadow of Your Smile
Softly as in a morning sunrise
Speak Low
Spring is here
Stella by starlight
Umbrella by Rihanna
Wave
What a difference a day made
What is this thing called Love
You’ve changed
You go to my head
and many more as well as popular Soul songs on demand.
Customer questions

I have the option of playing solo, duo, trio, quartet or quintet with any of the following: singer, guitarist, bassist, pianist/keys, DJ, drums, percussion, trombone, saxophone and more classic strings.

I'm happy to adapt within reason and am always aware that events such as weddings can go differently as planned. As long as my time commitment is respected and there are provisions that can be made anything can be sorted in my opinion.

Depending on how much equipment I need to bring between 20-40 minutes.

I'm happy to chat through any specific pieces you might want and add them to my performance beforehand.

Yes I do. Whether it's all acoustic or with electronics, I have it covered.

Yes I'm happy to learn specific pieces, however, if they require a lot of preparation and therefore working hours before the event I might have to adapt my fee slightly to cover the work.

I have a unique approach to jazz and improvisation and understand the atmosphere of an event very well.

Susheela Raman Ghost Gamelan at the Royal Festival Hall in 2018.

Standard Prices
All prices include:amplification equipment, violin, voice, synth
Packages
Drinks reception
Two performances of up to 45 mins each during your drinks reception
£450
Wedding ceremony + Drinks reception + Dinner
- Music before the service begins, music during the signing of the register, and music as guests leave. - 2 x 45 min performances at the drinks reception. - 2 x 45 min performances as dinner is being served.
£600
NEW!Virtual services
Personalised Music Message
Book me to create a unique music video for you to send to a friend as a gift. This could be a birthday message, first dance song for a wedding anniversary, or just your friend's favourite song to cheer them up.
£35
Johanna Burnheart
I will be able to record a 30 minute solo set of violin, voice, synth and drum machine, filmed with an HD camera and properly mixed and mastered for submission! I'm also happy to incorporate specific songs as long as they work for my instrumentation.
£300
Birthday Video
I can produce a highly produced and personalised birthday video for your loved one. Please see the video for details. Price negotiable if you'd like a cover of an already existing song.
£500

Very good, professional violinist. She did turn up when she said she would :-) Overall very pleased with both performance and attitude.