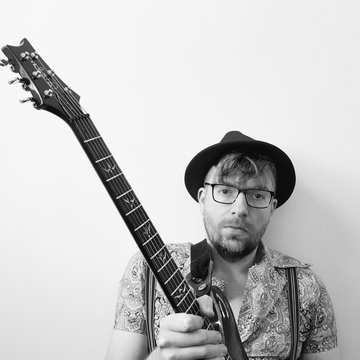 A powerful presence on any stage, Joel White is dynamic, musical and entertaining in equal measure. Soul, Blues, Jazz and Funk are the languages he most fluently speaks. Since the age of 7 playing music has been a part of his life, starting with guitar then diversifying and adapting to becoming a multi-instrumentalist and accomplished songwriter. Whilst building a multi-faceted portfolio career Joel has worked behind the scenes with great acts including 10cc, Sophie Ellis Bextor and The Three Degrees. On stage his skill in listening and engaging with others musically has taken him around the world including performances in the US, Scotland, Belgium, Holland, Austria, Germany, France and as far afield as Australia. At the start of this new chapter, Joel is making strides at home and on foreign soil, taking his music to a wider audience. His influences include the likes of B.B. King, The Beatles, The Carpenters, Jon Cleary, Stevie Wonder, Dire Straits, Steve Vai, Guthrie Govan and many more. Sharing passion and enthusiasm in communication of emotion and feeling are central to the music Joel creates. In recent years Joel's performance credits include 10cc, Aynsley Lister, Heidi Burson, DR Savage And The Incurables, King Size Slim and support for Lisa Mills,The Animals, Catfish, Maggie Bell And The British Blues Quintet and many

I'll be as flexible as possible and I ma experienced enough to know that sometimes things don't run to time. If anything changes before the event, please let. me know and I'll do my best to accommodate you.

1 hour is plenty of time and what I'd aim for, but 30 minutes is the absolute minimum time needed to set up an acoustic gig.

I am happy for you to let me know if there's anything particular from my song list that you'd like to hear. Pop your selections in an email and I'll be happy to play them.

Yes, I usually work on the basis that I'll provide my own PA and amplification for an event. If there's limited space or a possibility of equipment sharing with another musician or act please let me know.

If there's a particularly significant song you wish to hear at your event please let me know. There will be a small added charge for the extra time spent learning and rehearsing in time for your event.

The quality of musicianship and setting the right mood and atmosphere.

As a solo artist I have been influenced by the likes of Stevie Wonder, Allen Stone, B.B. King, Bill Withers, Nat King Cole, Sinatra...

I once performed with 10cc on a Belgian radio show as a deputy vocalist. It was a pleasure to perform with great musicians and a band with such a rich back-catalogue.

Joel was excellent - really nice guy who played and sang a wide variety of music from pop standards to more classical guitar. He has a lovely jazz vocal which complimented the occasion perfectly without overpowering it. Very pleased with his performance and flexibility to work around our schedule. Thoroughly recommended.

Joel White is astoundingly talented. His band opened my Secret Party in 2019 and blew my crowd away. If you want original funk, soul or blues with a twist which will get everyone dancing, then look no further. Whether you are looking for an acoustic intimate set or a full band, Joel can set the tone just right. Tina Morris, Sweet and Dandy Ltd & Coastal Currents Arts Festival

fantastic cool afternoon with the Diamond Standard, pitch perfect, soulful jazz that made our Sunday Afternoon at The Owl Camber without doubt something special

Joel came to play at our street party on June 29th. He was clear with his pricing and he was organised about times of arrival and departure. He arrived promptly and set up to play with no fuss. It was great. He played the perfect music and songs for two sets of 40 mins, plus bit more. The sound and tempo were absolutely brilliant and everyone loved his own music. He was a delight to have at the do and we all would like him to come again at our next event. I would be delighted to recommend him for your event. He is charming and his music is brilliant.

Verified
Claire B, 1 year ago

Joel. Thank you so much for tonight. You and James were awesome 😎 The whole pub had a fantastic time.

We booked Joel and his band for our wedding this year, as we have seen him play on many occasions and we’re aware of the extremely high standard of musicianship and performance that he brings to each show he plays, big or small. The band did not disappoint, and in fact exceeded our expectations in every way. We booked Joel to play both during the day and also in the evening with the band, and as ever was the consummate professional throughout the whole process, which was easy and stress free. The band arrived promptly and set up subtly without any interruption to the proceedings. As hoped, they produced a performance that blew everyone away, with a set tailored to the occasion and perfect choice of songs which suited the mood perfectly and produced exactly the atmosphere we were hoping for. As ever, the quality of the music was outstanding, with each band member an expert of their instrument. Joel stole the show with his guitar solo in ‘Purple rain’ which we had requested as a finale, and had the audience in awe, many with their phones out filming. The band catered to all of our requests seamlessly and went above and beyond to produce a spectacular show that no one will forget. The music was really the highlight of our day, and people who were there are still talking about them now whenever the wedding comes up in conversation. If you want a highly professional, reliable band who will deliver the highest standard of musicianship throughout a captivating and mesmerising performance, then I would fully recommend Joel white as the man to go to

Hi Joel I just wanted to thank you for your performance at my daughters' Wedding last Friday, you were superb, exactly how I imagined in my head. You need to know that a member of the Hotel staff came up to me and said how fantastic she thought you were

I've had the pleasure to work closely with Joel on a few different musical projects throughout the last year. Most recently, my summer tour in the UK. His attention to detail both on and off stage is unmatchable! He is a superb talent whether he is singing or playing one of many instruments he excels at. Not to mention his show preparation involving any amount of tour manager/sound engineer type duties were executed efficiently and cost effective which put my mind at ease to focus on performing. He is a creative talent and a musical genius who I'm fortunate to call my friend and I look forward to many more ventures with him to see what music we can create together

Just wanted to say a huge thank you for Saturday, we thought you were fantastic and really made the atmosphere perfect for our special day.We will highly recommend you to all our friends and family!!

Joels performance was fantastic, very professional, original and got everyone singing along and having a great time. You can tell that Joel is completely passionate about his music and he puts this passion into his performances. I would not hesitate to recommend him for any future events.

You did a great job playing for us "oldies" and your choice of music went down very well......you played some great songs, at the right level for everyone to be able to still chat and enjoy your guitar playing and singing. I will certainly recommend you to any and all of my friends who would like to enhance their party night !!

Hi joel! Thank you for playing at our wedding!! You guys were awesome 😎 and what a day we had....