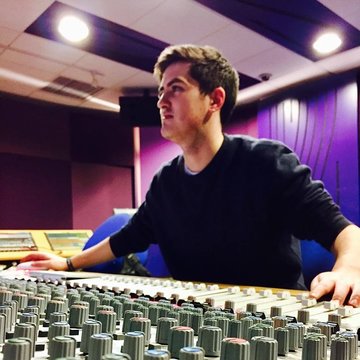 Joe is a full-time professional drummer and drum teacher, specialising in improvisation across all styles, sight reading and playing by ear.
Drummer
Leeds

Drumming since 2003 (professionally since 2006) Joe has years of experience playing in bands of all styles. Performing regularly in a rock band from the age of 11, Joe later joined an award winning big band at his secondary school, touring the UK and Europe. Joe has played for internationally revered artists such as Clara Sanabras (folk singer/multi instrumentalist), Mike Outram (jazz guitarist) and Holy Moly And The Crackers (folk/rock band). As well as being a seasoned performer, Joe has played in over 15 musicals as a pit band drummer and percussionist, proving himself as an outstanding reader and improviser. Joe is currently a full time drum teacher, working at a performing arts specialist secondary school in North Yorkshire. Specialising in one-to-one drum kit tuition, Joe also tutors percussion, music production and songwriting, as well as running group music and drumming workshops in primary schools. Joe can easily transport all of his own equipment and supply a full drum kit and a large array of African drums and percussion such as: djmebes, bongos, congas, dununs, shakers, maracas, cabasas and more.

Since Joe went to University I haven’t been able to find a teacher who makes me want to work hard and practice regularly like Joe has. He makes lessons fun and interesting and is really easy to get on with.

Joe is a responsible, reliable, honest and independent thinking, empathetic young man who will be a positive asset to any artistic, working and dynamic classroom environment.