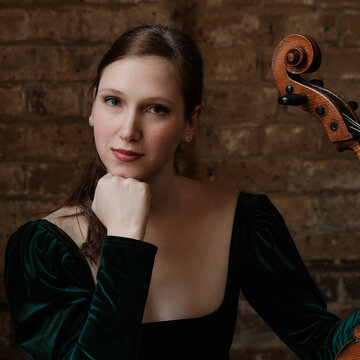 Dutch cellist Jobine Siekman attended the Young Talent Class at the Royal Conservatory in The Hague from the age of 12, where she studied with Lucia Swarts and Dmitri Ferschtman. In September 2013 she started her Bachelor music studies in The Hague Royal Conservatory and she did an exchange to the Gothenburg Academy of Music and Drama, where she studied with Harro Ruijsenaars. She recently finished her Bachelor degree with First Class Honours with professor Melissa Phelps at the Royal College of Music, London. This year she will continue studying there as Irene Hanson Scholar supported by The Royal College of Music for her Masters of Performance degree. In 2016 Jobine won the third prize in the finals of the National Cello Competition of Cellobiennale Amsterdam. Prior to that she was awarded second prize in the National Competition of the foundation Young Music Talent of the Year (2011) and the Anna Shutlleworth Prize in the RCM cello competition (2016). Last July she played the second Bach Suite in Wigmore Hall as part of the RCM String Showcase 2017 concert. On numerous occasions she has been on Radio West in live broadcasts from the Dr. Anton Philips Hall in The Hague, as soloist in works by Bach and Haydn, and in various chamber music ensembles. With her string quartet Jobine performed in ‘Vrije geluiden’ on Dutch national television in 2008. She has performed the Shostakovich, Haydn, Saint-Saëns cello concertos and Bruch’s Kol Nidrei as a soloist with orchestra. Jobine is a passionate chamber musician and a member of several successful ensembles with which she performs regularly in the UK and the Netherlands. She joined the Volkmann Piano trio in 2016 and recently they played concerts for the Supreme Court and in the Concertgebouw Amsterdam. Other highlights include performances at Wigmore Hall, Cadogan Hall, Elgar Room in Royal Albert Hall, Leith Hill Place, and the Stoller Hall at Chetham’s School of Music in Manchester. Jobine received lessons from Johannes Goritzki, Frans Helmerson, Torleif Thedeen, Raphael Wallfisch and Anner Bylsma and Henrik Brendstrup. The Amsterdam Concertgebouw invited her to have a masterclass with Jean-Guihen Queyras. At the Amsterdam Cellobiennale 2010 she took part in a masterclass by Valter Dešpalj and in 2012 with Tsuyoshi Tsutsumi . In 2011 she was invited to join the International Cello Festival of Winnipeg, Canada. She has also participated in the Holland Music Sessions, Musica Mundi Festival, the Kronberg Academy cello masterclasses, Apeldoorn International masterclass, Astona masterclasses, Voksenåsen masterclasses and Ticino Musica Festival. Jobine is a Irene Hanson Scholar supported by The Royal College of Music. She plays a Thomas Dodd cello from 1800, provided by National Musical Instruments Foundation NMF. She is also sponsored by the Hendrik Muller Fonds and Prins Bernhard Cultuurfonds.