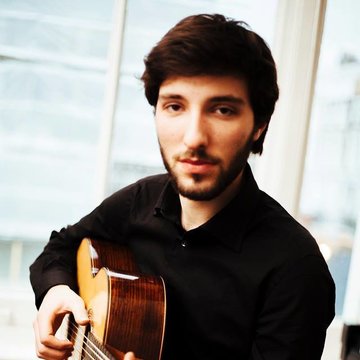 Joao is a guitarist/composer who is passionate about all genres of music, especially the Classical Guitar.

Born in Portugal, Joao Lima is a graduate from the Royal Academy of Music (Bmmus & Mmus) who prides himself in his versatility and broad musical interests. As a solo artist, he has performed in venues like King's Place as part of the London Guitar Festival and with his guitar and cello duo, in the "Orange Tea Time Concerts", in Frome. He has played in weddings, privates events and restaurants, always varying and adapting his repertoire accordingly. Besides the classical guitar, he has a strong interest in electric guitar, composition as well as performing with non-classical artists and collaborating with other art forms. He is currently based in London.

Joao filled our establishment on the 25th of April with a delightful array of classical pieces as well as especially prepared Portuguese song arrangements from the Revolution of '74. He gave the clients at the restaurant wonderful background entertainment without overwhelming anyone. All in all, a pleasure to work with him... he's already booked for few eves during summer!

Verified
Andrea A, 3 years ago

Joao Lima (guitar) alongside Charlotte Kaslin (cello) came to Frome to perform in our concert series with great success. Their choice of repertoire and performance was full of energy and emotion, captivating the audience in full. They not only connected with the attendees through their craft, but also through their words and humour. A lovely afternoon of music.