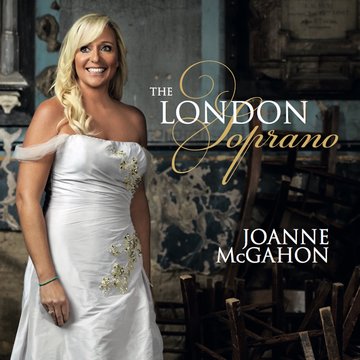 The London Soprano - Joanne McGahon London based, award winning Soprano Joanne McGahon is an international performer of startling versatility, able to communicate with passion and understanding a vast range of music in any setting. Joanne charms her audience wherever she goes, whether as an imposing and dramatic opera singer or during her delicate and thoughtful Oratorio singing. Joanne McGahon trained with English National Opera and the National Opera Studio in London, recent operatic roles include the title role of Tosca, Guinevere (Camelot), Gianetta (Gondoliers) and Elsie (Yeoman of the Guard). Awarded 'The Voice of North London', Joanne appeared at Trent Park's Open Air Classical Prom and more recently starred with Rick Wakeman and the Orion Symphony Orchestra at the Last Night of the Water Rat Proms. In 2017, Joanne was honoured to be asked to sing a newly composed hymn with All Soul's Orchestra to Her Majesty The Queen for the 150th Anniversary of Scripture Union which was aired on BBC Songs of Praise. On the concert platform, oratorio highlights include St. Paul's Cathedral, Watford Coliseum, Vienna (All Soul's Orchestra), Festival Internazionale del Teatro Romano, Bayeaux, Coutances and Notre-Dame Cathedrals and guest appearances in New York and Sweden. In addition to performing live on BBC Radio 4 Sunday Worship, Joanne is the official opera singer for Absolute Radio, recording for film and television soundtracks as well as chart success with her first classical album 'Laudate Dominum'. In her spare time, she can be found opera singing in the lower piazza Covent Garden as well as charity work providing music therapy. Joanne's latest album The London Soprano entered The Official Classical Charts at number 7 as well as being played on John Brunning's Classic FM show after achieving a top ten chart position. Recorded with the multi-award winning City of Prague Philharmonic Orchestra and conducted by Paul Bateman, Joanne's voice on the recording has been described by critics as stunningly beautiful.

AT
Alexandra T
5 months ago

My husband and I were really excited about having Joanne to sing at our wedding service and reception but nothing prepared us for how truly sensational she was to see live. Every time I think back to our day and Joanne singing I feel the Goosebumps start all over again. Joanne made our day truly magical and I feel so grateful for how special she made it for us. I will most definitely be asking Joanne to perform for us again sometime in the future. Thank you so much from the bottom of our hearts Joanne! x

Joanne was absolutely amazing and made my fathers ' celebration of life ' just perfect adding that extra special touch. The whole family told me how Joannes singing just blew them away. She was so professional, yet so down to earth even helping during my speech by giving me some water as I got a very dry mouth. Lovely lady and highly recommended. I have been asked by many for her details . Just perfection and gave my father the send off he so rightly deserved. Many thanks 😊 xx

We were thrilled to secure Joanne for my Dad’s 70th. She was so friendly yet highly professional. I know from the videos that I had chosen someone really talented but my goodness, when you here her singing live it’s breath taking. Such a talent. So humble. Utterly brilliant. Cannot recommend her enough and my Dad was so happy.

From 'O Mio Babbino Caro' through to 'I could have Danced all Night' Joanne's varied repertoire was delightful. Her superb singing and bubbly personality added a very special touch to the evening. Thank you Joanne for making Gerry's birthday a most memorable occasion. (I don't remember him ever giving 10/10 before!)

I first met Joanne while singing at Covent Garden. Her range and repertoire were immediately interesting! I was then able to book Joanne to entertain my colleagues at our 75th Anniversary celebrations in Mayfair. Her singing was enthralling and her lively personality fully captivated the essembled guests. As well as giving a superb mixture of songs and arias, Joanne was able to offer a lightness to the celebrations, which was heightened during the festive evening dining as she entered into the spirit of the occasion. We all went home having experienced an excellent meal culminating with her rich, fine singing. Denis Gibney