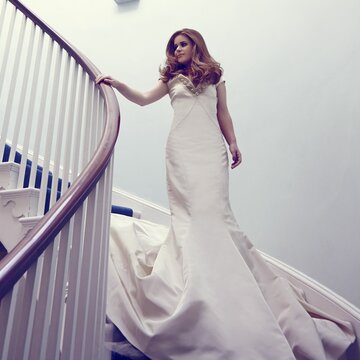 Joanna shot to fame in 2017 when she broke records becoming the first independent artist to go straight to Number 1 in the Official Classical Album Charts with a debut album, "Stars Are Rising". Her 2nd album, "The Rhythm of Life", released in 2019, also shot straight to the top of the classical charts on release. Both albums received critical acclaim across TV, Radio and National Press including Album of the Week in The Sunday Mirror. Joanna entered the world of classical crossover in 2014 following a successful West End and TV career. Her first public performance as a crossover artist was in duet with Britain’s Got Talent megastar, Paul Potts, at The Palace Theatre, London who later also guest duetted with Joanna on "The Rhythm of Life" with a new arrangement of Boccelli's "Because We Believe". Further recordings included a classical Number 1 single with "The Royal Platinum Love Song", released to celebrate 70 years of marriage between The Queen and Prince Philip, a Top 10 classical christmas hit, "That is his Story" and a lead appearance on the Sir Paul McCartney backed “Choirs with Purpose” Stand Together album backed by a 600 strong choir. No stranger to high profile performances, Joanna has sung on the pitch at Premier League and Championship Football Grounds, on BBC's Songs of Praise performing "Ave Maria", as lead soloist at the prestigious Bedford Park Proms and York's Castle Howard Proms, theatres up and down the UK and on her own nationwide tour. As a result of Joanna's chart success she was awarded the first ever "Future Classic Women" Award in May 2019.

Classical
O Mio Babbino Caro
Time To Say Goodbye
Parla Piu Piano
The Flower Duet
Nessun Dorma
Sposa Son Disprezzatta
O Holy Night
Un Amore Per Sempre
The Prayer
Abide With Me
May The Lord Bless You And Keep You
Pie Jesu
Ave Maria
Because we Believe.
Musicals
Tonight (West Side Story)
Never Enough (The Greatest Showman)
Defying Gravity (Wicked)
Let It Go (Frozen)
The Impossible Dream (Man of La Mancha)
Phantom Of The Opera
Think Of Me (Phantom)
Pure Imagination (Charlie and the Chocolate Factory)
On My Own (Les Mis)
I Dreamed A Dream (Les Mis)
I Could Have Danced All Night (My Fair Lady)
Over The Rainbow (Wizard Of Oz)
Memory (Cats)
Hushabye Mountain (Chitty)
Let's Go Fly a Kite (Mary Poppins)
Rhythm of Life (Sweet Charity)
Food, Glorious Food (Oliver!)
When you Wish Upon a Star (Pinocchio)
If I Loved you (Carousel)
Crossover
Greatest Day
If I Ruled the World
I'd like to teach the world to sing
In My Life
Life On Mars?
How Does It Feel?
My Everything
You Raise Me Up
Proms
Jerusalem
Rule Britannia
God Save The Queen
Land of Hope And Glory
I Vow To Thee My Country
Customer questions

“Absolutely. This is a really popular request and we actually offer this service for free."

My range of singing opera, crossover and pop.

Ive had the priviledge to see Joanna Forest sing live many times and each time Im astounded by how amazing her voice is and what a lovely lady she is. The first time I met her she came running over to me and gave me a big hug. Each time I see her sing I have an amazing night. She's quickly become one of my favourite singers and look forward each time to seeing her sing again. If you have a chance to see Joanna sing live then I would go. You will be treated to one of the best nights ever.

‘Joanna Forest is a sensation! Cannot wait to hear you sing again’

‘I got to see joanna when she was on a tour for mary jess, I didnt have any idea who she was so it was to be the first time hearing her and she didnt disapoint, for someone so small she has such a powewfull voice,she sang some beautiful songs and then at the end we talked and she was so nice, I later got her cd and its beautiful,if you have a chance to see her live and even meet her then you must jump at it you have no regrets’.

When I first heard Joanna Forest singing (it was “Pure Imagination”) I was instantly bewitched by the magic quality of her voice. Since then I call her Joanna from Enchanted Forest. Joanna’s voice is unique and I always recognise it. Her voice does not penetrate but somehow envelops you and like some magic blanket of love it wraps you up in its purity. Joanna is gorgeous and has absolutely amazing stage presence and indeed does look like some Disney Princess who stepped straight from the screen to us. I often compose specially for Joanna, having her voice in my mind, while creating my music. It was a great pleasure to listen to Joanna performing live (I once even accompanied her singing two of my pieces). Please do not miss the chance to come to Joanna’s concerts, believe me it will be a very special treat!

had the pleasure and privilege to attend Joanna Forest's 'Stars Are Rising Live Tour, at Loft Theatre in Leamington Spa. Joanna sung a number of songs from her album plus other favourites. I have heard Joanna sing a few times this was the first time at a concert of her own. And as was expected she was fabulous. She had three guest acts West End star Daniella Bowen, James Stephens plus Nicky Dawn Stewart & Strawhouse Singers. Every one was fantastic. I had the opportunity to chat, afterwards to Daniella, Nicky and of course Joanna. It was lovely to do so. All in all it was a wonderful evening of great music and song. I look forward to seeing everyone again, soon.

Joanna Forest is the complete performer. Her talent as a singer is second to none and when you put that next to her extraordinary beauty, stage presence and natural charm you have an artist that will put on a show that the audience or your guests will be talking about for years to come. I was very fortunate that Joanna had agreed to take part in a London Concert that I had organized back in October 2016 collaborating with 3 other top female artists. Joanna sung a variety of songs that really showed off her vocal range and her ability to sing a variety of musical styles and genre. The reviews from that concert were out of this world and I had so many people asking for a repeat performance. Joanna has since gone on to record her debut album ‘Stars are Rising’ that debuted at No.1 in the UK classical charts. Joanna now holds the distinction of being the first independent classical crossover singer to hit #1 with her first album. Once again this album shows how innovative, original and forward thinking this young lady is as she featured tracks from Bowie and the Beatles and tracks I have not seen covered by a classical crossover singer before. Joanna is the perfect artist to put the icing on the cake for any public, private or corporate event and can adapt her set to make your event the talk of the town. Joanna always makes every effort to meet and greet her audience either before or after the event and she makes everyone feel welcome and as if they were her best friends. I would have no hesitation in recommending Joanna and would be so honoured if she agreed to feature in any future events I decide to hold in the future.