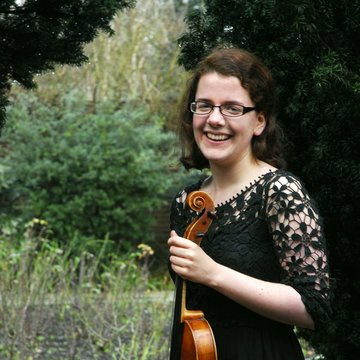 Manchester- based Viola player specialising in Classical and Folk events and concerts.

Somerset-born violist Jenny Key has studied at the Royal Northern College of Music, since September 2018. She previously studied under Jonathan Barritt at the Royal College of Music. As a solo and chamber musician, Jenny has performed in the Royal College’s ‘Rush Hour Concerts’, ‘Super String Sunday’ and ‘RCM Chamber Music at St Mary Abbots’. Her most ardent musical interest is in British Twentieth Century viola works and she has performed for such eminent violists as Ida Bryn, Ivo van der Werff and the RCM’s International Chair of Viola, Jennifer Stumm. Her recent orchestral work has seen her be conducted by Vladimir Ashkenazy at the Royal Festival Hall, and Bernard Haitink. She also frequently performs with the Royal College of Music’s Symphony and Philharmonic Orchestras, as well as working in recording sessions with many emerging student composers. A keen mentor of young musicians, Jenny also works closely with the National Children’s Orchestras of Great Britain, and the Royal College of Music’s outreach programme ‘Sparks’.

I worked with Jenny on a short recording project a couple of years ago. She only saw the music on the day and was able to work straight away on it, creating a dynamic and expressive performance that led to a brilliant final recording. She was so easy to work with, really willing to try new ideas and giving her full commitment throughout the day. She is a brilliant musician with a top work ethic - I would highly recommend her!

Jenny is a reliable and talented viola player. I have previously employed her to perform in orchestral concerts and she is always punctual, well-prepared, and professional throughout rehearsals and performance.  Smart in her appearance, she has set an excellent example to my sixth form students and I will certainly employ her again in the future.

Violists in the UK