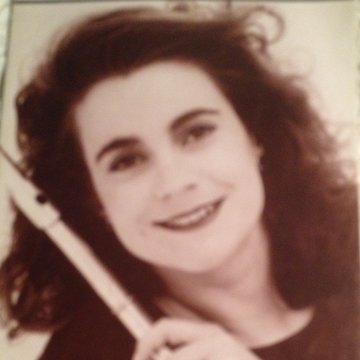 Jennifer Stinton, an internationally recognised flautist, has performed as soloist and orchestral musician at many veunues.
Flautist
Sevenoaks
Public liability insurance of £10 million

Jennifer Stinton, an internationally recognised flautist, has performed as soloist at many international festivals. Solo concerts abroad have included the performance of a concerto in the Concertgebouw which was broadcast live on Dutch television, a recital in Davos, Switzerland, for the World Economic Forum and tours of France, Scandinavia and the Middle East. Jennifer studied the flute at the Royal Academy of Music and was subsequently awarded a Countess of Munster Scholarship and Arts Council Award to continue her studies with Geoffrey Gilbert in America. On her return to London she won a Martin Scholarship and student fellowship from the Academy to research new repertoire for the flute and has since been elected an Associate of the Royal Academy of Music. A finalist in the 1987 Royal Overseas League Competition, she went on to win the 1988 South East Arts Platform. The following year Jennifer made her first of twelve recordings for Collins Classics, embracing much of the solo and chamber repertoire for the flute, including her own transcription of Barber's Violin Concerto with the Philharmonia Orchestra. Jennifer is committed to the promotion of new and rarely heard music. She has been a featured artist on BBC Radio 4 and her American Album with Malcolm Martineau was released following a highly successful, live BBC Concert Hall broadcast. She frequently appears as a soloist in London at the Wigmore Hall and the Southbank, having made her debut at the Royal Festival Hall in 1991, performing the Mozart D Major Concerto with the Philharmonia Orchestra in the presence of HRH Diana, Princess of Wales. Throughout her career, Jennifer has also played as Guest Principal Flute in many of the major orchestras including a long-spell with the Royal Philharmonic Orchestra. Jennifer also leads a busy life as a teacher, working with private students and giving masterclasses throughout the U.K., Europe, U.S.A., and Turkey.

Your performance added such a wonderful atmosphere to our special day, thank you Jennifer"