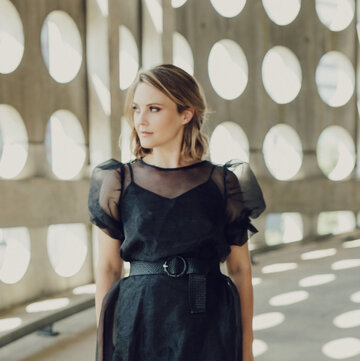 Award-winning Latvian jazz singer Jekaterina Sarigina has studied at the New England Conservatory in Boston, USA, and at the Guildhall School of Music & Drama in London. February 2019 saw a release of her debut EP 'Day One' featuring an international cast of musicians from Brazil, Lithuania and UK interpreting Jekaterina's original contemporary jazz compositions. Her clear tone and expressive interpretation of American Songbook has taken her to perform in Finland, UK, Baltic States, France, South Africa, and has earned her awards in the following vocal jazz competitions: Jazz Voices 2011 in Lithuania and Voicingers 2012 in Poland.

Small changes are ok, we always try to accommodate our clients

yes, we can provide background music between the sets. Staying after the sets would have to be discussed separately.

For a duo, I would say 30min as a minimum and 1h as a maximum

Yes, most of the time

Yes, we can accommodate a couple of requests

Katya has a lovely voice and together with her guitarist Dan played a very good set for our guests attending a degree day lunch. She was extremely professional and I would have no hesitation in recommending her. Mary Chalk St Peter's College, Oxford

Verified
Brigitte B, 3 years ago

Jekaterina possesses a lovely, clear and soulful voice and is an extremely musical and sensitive singer.

Singers in the UK
Singers in Maidstone
Singers in Basildon
Singers in Southend-on-Sea
Singers in Sevenoaks
Singers in Chelmsford
Customer Service
Discover
Company
As seen on
© Encore Technologies, Ltd.
Crafted with bagels and in London