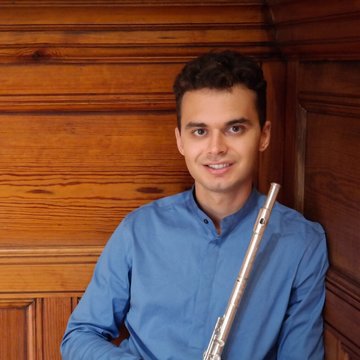 Jaymee is a Junior Fellow of the Royal College of Music and is on trial as Principal Piccolo of the BBC National Orchestra of Wales.
Flautist
London

Coonjobeeharry is the Constant and Kit Lambert Junior Fellow of the Royal College of Music, where his professors include Adam Walker, Paul Edmund-Davies, Gitte Marcusson, Stewart McIlwham, and Kathleen Stevenson. He is currently on trial as Principal Piccolo at the BBC National Orchestra of Wales and enjoys a busy freelance career that includes playing in orchestras such as the BBC Symphony Orchestra and the London Philharmonic Orchestra. At the Royal College of Music, he has played under some of the world’s foremost conductors, including Bernard Haitink, and has been selected to perform in masterclasses with eminent flautists, including Sir James Galway. Jaymee's studies are generously supported by the Biddy Baxter and John Hosier Music Trust 2017 Scholarship and he is a Yeoman of the Worshipful Company of Musicians. Jaymee enjoys a diverse musical life and is currently the flute player in the National Youth Jazz Orchestra. He has worked in close collaboration with composers who have written works for him, including a Flute Concerto by Hamish Brown and a Flute Sonata by Guy Newbury. Jaymee is regularly invited by orchestras to perform as soloist and last year he performed concerts with the Gothenburg Wind Orchestra, alongside Swedish flute virtuoso Göran Marcusson. His most recent solo engagements also include a performance with soprano Dame Felicity Lott, and a Classic FM video performance of 'Flight of the Bumblebee' with pianist Frederic Bager, which has received over 500,000 views to date. Whilst a student at Oxford University, Jaymee was President of the Oxford University Sinfonietta, and developed a strong interest in chamber music. He is a founding member of the Godiva Trio, which was awarded the 2017 Douglas Whittaker Wind Ensemble Prize, and recently performed Ravel's ‘Introduction and Allegro’ with the Harlem String Quartet and Harpist Ieuan Jones. Jaymee's love of music has always gone hand in hand with a passion for science. After 8 years at the Royal College of Music Junior Department studying with Margaret Ogonovsky, he was offered a place at Oxford to read Chemistry in 2011, and whilst remaining musically very active, he graduated with a Double First Class Masters.

Young flautist Jaymee Coonjobeeharry joined The Zeitgeist Chamber Orchestra in an electrifying performance of Vivaldi’s La Notte Concerto. A wholly-engaging reading, where Coonjobeeharry showed himself in total control in terms of some exceedingly neat playing in rapid figurations, allied to a mellowness of tone when required, and all mindful of a well-judged sense of shared dynamics.