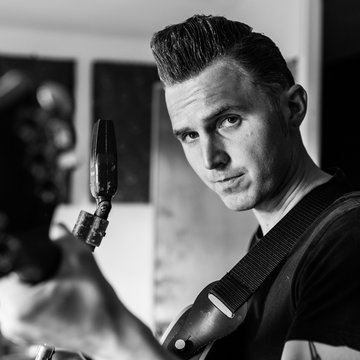 Jay Osborne is a professional musician and actor with over 16 years of performance, touring and composition experience.
3 of 12 photos
Guitarist
London
Public liability insurance of £10 million
Verified profile

Jay Osborne has been playing the guitar since the age of 7 and later trained as a professional musician at The University of Chichester in West Sussex and graduated in 2010 with a high BA Hons Degree, majoring in composition and performance. He has performed professionally in bands since the young age of 15 and has toured internationally for over 15 years. Jay started out as the guitarist and front man for bands Hopeless Attendance, The Stops and Platform 13, supporting such bands and acts as; The Hives, Nick Harper, Nizlopi, Paolo Nutini, The Artful Dodger, Breed 77, The Wide Boys, Goldie Looking Chain and Bob Dylan to name just a few. As well as Music Jay worked his way into the professional world of acting about 10 years ago, performing in a range of instrumental, singing and physical theatre companies internationally on a mixture of cruises, corporates, tours as well as festivals and television work (companies include; BBC, Disney, Ferrari, ITV, Royal Caribbean, BKL and Sky 1 to name just a few). Over the last 3 years Jay has been the lead guitarist for some of Bill Kenwright’s biggest West End and touring musicals, most recently ‘Dreamboats & Petticoats’ and the new smash hit musical ‘Cilla The Musical’. In between tours Jay spends a lot of his time dep-ing, composing for others, gigging and doing session work.

He can really make that guitar sing