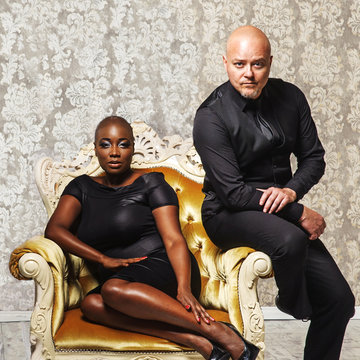 If you like a passionate and classy duo, we are your the best choice you can do!
Acoustic duo
Ruislip
Public liability insurance of £10 million
Verified profile

As well as being a rising solo artist on the Jazz/Soul music scene, Janine is a lead vocalist with the Westcoast Soulstars, the Cool Million Family and Urban Voices Collective and she works regularly in the music industry as a session singer. Her collaborations include Ian Shaw, Paloma Faith, Bobby McFerrin, Take That, George Michael, Ray Davies, The Who, Kaiser Chiefs, Sarah Jane Morris, David Arnold and the list continues. Janine is adventurous and passionate about life in general. She was living and working in Spain for 12 years before returning to London to further her music/acting career. She trained in Musical Theatre at Guildford School of Acting and has played a number of roles in Theatre and TV, the most recent being; The Harder They Come, Blues Brothers and Midnight Beast (E4). As a singer/songwriter she has one Album; Strength, Wisdom and Growth, a freshly released EP called Passion with the second album due for release in 2018 Emilio Merone is a Piano player, composer, arranger, film composer and music producer. He has a Master's Degree in Classical piano and 2 Diplomas in Jazz and modern music. He recorded as piano player in 24 CDs and made tours all around the world with great musicians as Antonio Sanchez, Scott Colley, Jaques Morelenbaum, Anita Wardell, Heidi Vogel, Sarah Jane Morris, Joy Rose, Sulene Fleming, Celia Mur, Emilia Martensson, Janine Johnson, Katie Leone and others. He is a Roland endorser since 2015 and Musical Director in several bands and theatres shows in UK and Italy. For the publisher Carisch (now Music Sales UK) he wrote a piano method "Piani Incrociati", and the Michel Petrucciani’s omnibook. For “Createspace” of Amazon he wrote “Scales and arpeggios” He scored 2 movies and 2 documentaries and also adverts for Barclays, Lexus, Toyota, Jaguar, Land Rover, Emergency UK, Sanghamitra Promotions, Autism Aid Onlus, RAI, Mediaset.

David A, 5 years ago

"Janine can SING……go see her"

With a voice of smooth velvet and a body to die for, Janine Johnson embodies SOUL