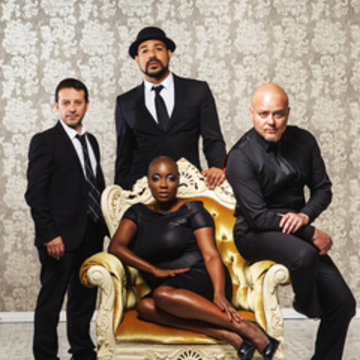 As well as being a rising solo artist on the Jazz/Soul music scene, Janine is a lead vocalist with the Westcoast Soulstars, the Cool Million Family and Urban Voices Collective and she works regularly in the music industry as a session singer. Her collaborations include Ian Shaw, Paloma Faith, Bobby McFerrin, Take That, George Michael, Ray Davies, The Who, Kaiser Chiefs, Sarah Jane Morris, David Arnold and the list continues. Janine is adventurous and passionate about life in general. She was living and working in Spain for 12 years before returning to London to further her music/acting career. She trained in Musical Theatre at Guildford School of Acting and has played a number of roles in Theatre and TV, the most recent being; The Harder They Come, Blues Brothers and Midnight Beast (E4). As a singer/songwriter she has one Album; Strength, Wisdom and Growth, a freshly released EP called Passion with the second album due for release in 2018

We are so glad that we have got Black Cherry Swing to perform during our wedding breakfast. The performance was awesome. The music and the vocal set the perfect ambience for the banquet. We have received many compliments of the band performance from our guests who flew all the way to the UK from Hong Kong. They enjoyed it so much that many of them even started dancing during the banquet! We were also very impressed by Janine’s performance, powerful yet soulful. We are so glad to also have her performing the opening song for our first dance. Our wedding night would not be as memorable without Black Cherry Swing’s amazing performance!

Janine can SING……go see her

With a voice of smooth velvet and a body to die for, Janine Johnson embodies SOUL