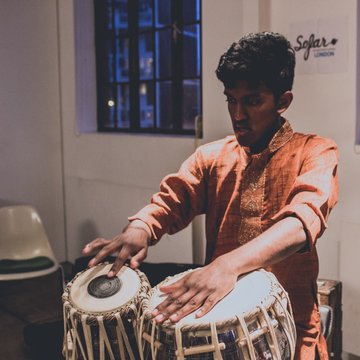 Janan is a tabla player and producer. He co-founded The Fusion Project and currently performs with Rahat Fateh Ali Khan.
3 of 8 photos
Indian Percussionist
Harrow

Janan has studied tabla for the past 16 years, and since 2015 has focused on the role of percussion in different genres. He was introduced to the instrument by his father at the age of 6, and began classical training thereafter, completing his first solo performance in 2007 at the Bharatiya Vidya Bhavan in London. Subsequently, he joined SAMYO, the UK’s national Indian classical youth orchestra, and has since had the privilege of playing at venues such as the Royal Albert & Festival Halls, with world-class musicians including Rakesh Chaurasia, Ranajit Sengupta and Palakkad Sriram. In addition, he took up drum kit training at Trinity Guidhall, and has continued to practice music alongside his studies at medical school in London. In 2015 he formed The Fusion Project, a group of Carnatic and Hindustani musicians whose aim is to create music blending Western popular and contemporary writing with Indian classical traditions. Within this project he composed a tabla-focused fusion repertoire, incorporating elements of pop and jazz music, which debuted in June 2016. Since then, he has performed qawwali and fusion originals at the Sheldonian Theatre with Ustad Rahat Fateh Ali Khan.

It's amazing what the British Tamil tabla prodigy can do...

Indian Percussionists in the UK