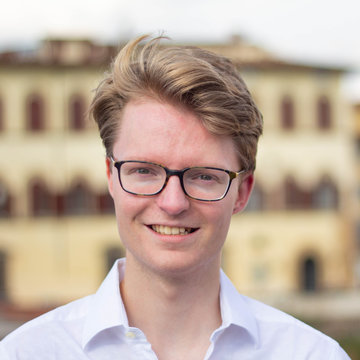 Jamie Conway is a young conductor, singer, répétiteur, and teacher based in Surrey. A music graduate of Robinson College, Cambridge, he is now a teacher and School Organist at St John's School Leatherhead, where he has responsibility for the premiere choir, Schola, as well as accompanying the lively chapel music and other co-curricular programmes. Originally a boy chorister at Gloucester Cathedral under Andrew Nethsingha, Jamie went on to sing with the Choir of St John's College during his time at Cambridge, performing worldwide tours and on numerous records for release, as well as live broadcasts for the BBC and other networks. Jamie began studying the organ with Ashley Grote aged 11, and subsequently won Academic and Music Scholarships to Uppingham School. There he regularly conducted and accompanied the choirs and set up new groups including the ongoing ‘9.5 Singers’ who supported the King’s Singers at the London A Cappella Festival 2015. Organ studies continued with Peter Clements, piano with Alexis Ffrench, singing with Catherine Griffiths and percussion with Sarah Stuart. His interest in conducting grew, conducting the school Chamber Choir on tour in Hong Kong, Singapore and Malaysia at the age of 16. Jamie also sang with the National Youth Choir and National Youth Chamber Choir during this time, again touring China in 2016. Upon leaving school he moved to sing with the Choir of Truro Cathedral in Cornwall, whilst there working as a pianist and conductor for a number of groups including Cornwall Youth Chamber Choir and Truro Symphony Orchestra. Whilst on his gap year, Jamie co-founded the East London Symphony Orchestra, a group of conservatoire, university and exceptional school students. With the orchestra Jamie conducted Brahms' Second Symphony, Sibelius' Violin Concerto with Charles Westhoff, Vaughan Williams' 'Fantasia on a Theme by Thomas Tallis', and more. In January 2017, Jamie also was awarded the Associateship Diploma of the Royal College of Organists (ARCO) aged 18. In Cambridge, Jamie regularly conducted the St John's College Orchestra (SJCMS), and has given performances of Brahms Double Concerto with Stephanie Childress and Laura van der Heijden, Prokofiev 'Classical Symphony' and Haydn Cello Concerto No. 2 with Laura van der Heijden. He also worked as Musical Director and Répétiteur for Cambridge University Opera Society (CUOS), conducting 'Il signor Bruschino' by Rossini, which was reviewed by The Tab as an "expertly tailored performance", awarded 5 stars, and re-run at the Edinburgh Fringe Festival in 2019. In April 2018 Jamie founded the Raikes Consort choir and orchestra. The debut concert was Handel's formidable 'Dixit Dominus' in Robinson College Chapel, since performing Brandenburg Concertos in West Road Concert Hall and touring to Florence, Italy twice. Jamie’s compositions and arrangements have been performed and recorded by Uppingham School Chamber Choir, the Raikes Consort, The 9.5 Singers and ‘What the Funk?!’, in venues as prestigious as St Matthew’s Church, Northampton and West Road Concert Hall. He has performed in many of the UK's most significant venues, including the Royal Albert Hall; Royal Festival Hall and Queen Elizabeth Hall; Birmingham Symphony Hall and Town Hall; Snape Maltings Hall; Milton Court; King’s Place; St David’s Hall, Cardiff; as well as many international venues abroad including the Esplanade, Singapore; Hong Kong City Hall; Berlin Konzerthaus; and Müpa Budapest (Palace of Arts).

We will always try to accommodate your needs and we understand that sometimes timings will need to change slightly. However, if you are concerned that timings may need to change please let us know asap so that we are aware of any possible changes.

We usually expect to be able to rehearse in the performance venue for a period of at least 90 minutes before a performance, but this may be more or less depending on the type of set required.

I am happy to discuss with you any requests you may have and will look to make this work. Any costs that might be incurred from purchasing music etc. must, of course, be met by you.

I typically have everything needed for a performance.

I am happy to discuss with you any requests you may have and will look to make this work. Any costs that might be incurred from purchasing music etc. must, of course, be met by you.

We have given concert performances in many venues around Cambridge including Emmanuel and Robinson College Chapels, and West Road Concert Hall. We are happy to perform in a wide variety of situations, large or small.

Verified
Francis B, 2 years ago

The orchestra, under the baton of Jamie Conway, [delivered] an expertly tailored performance which managed to accommodate the soloists whilst being far too interesting and delicately executed itself to be ignored. (Review in The Tab of the CUOS Michaelmas Show: Il signor Bruschino)

The orchestra, under the baton of Jamie Conway, [delivered] an expertly tailored performance which managed to accommodate the soloists whilst being far too interesting and delicately executed itself to be ignored. (CUOS Michaelmas Show: Il signor Bruschino)